Network Ten's American owner ViacomCBS is poised to confirm plans to distribute prized Showtime content on its own streaming platform in Australia in a move that could diminish its relationship with Nine Entertainment Co's Stan.

Multiple sources who spoke on the condition of anonymity told The Sydney Morning Herald and The Age that ViacomCBS will reveal that it will stream Showtime content – which has previously included hit series such as Billions and Homeland – on its Australian platform, currently known as 10 All Access, when chief executive Bob Bakish announces the company's second quarter results on Thursday morning (AEST). 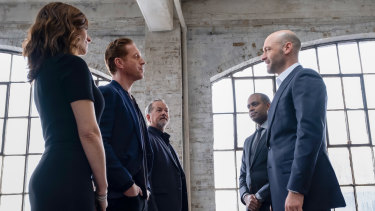 Billions is one of Showtime’s hit showsCredit:Showtime

Stan, which is owned by Nine – also the owner of the Herald, has been negotiating to extend or renew its contract with ViacomCBS for Showtime content after it failed to sign long-term content deals with US studios Disney and WarnerMedia, the owner of premium network HBO.

The looming decision by ViacomCBS means that new shows created by Showtime, the media giant's premium network, may not be available on Stan once its current deal expires early next year, sources said. Existing shows like Billions will be available on Stan for as long as they run under the terms of the agreement secured back in 2016, but it is unclear whether the new plans to be announced by Mr Bakish will preclude the streaming service from doing future deals for Showtime content.

Stan separately has a long-term output deal in place with ViacomCBS' Paramount studio, which makes shows such as YellowStone and The Great. It also has access to ViacomCBS' back catalogue of shows.

The decision by ViacomCBS suggests the American giant plans to intensify its push into the increasingly crowded Australian streaming video market. 10 All Access is also likely to be rebranded to reflect the new content available, sources said.

Nine chief executive Hugh Marks has previously said that no single output deal would “make or break Stan”. The existing Showtime deal was estimated to be worth about $35 million a year and was described as “the most significant content licensing deal in recent Australian history”.

Stan was hopeful of landing a multi-million dollar deal with WarnerMedia in May but an agreement was ultimately signed with Foxtel. It lost the streaming rights to Disney shows when Disney+ launched in Australia late last year. In the coming months shows like Friends will also be removed from the streaming platform, which has about 2 million subscribers.

But the streaming service has other content deals in place with prominent Hollywood studios such as Starz, Sony and Paramount. Industry sources also indicated that Stan is negotiating with NBCUniversal, which has a content slate that includes shows like Saturday Night Live and The Good Place. Some NBC titles that Stan has access to including The Office and Seinfeld are largely non-exclusive.

When Stan launched in 2015 it was largely competing against Netflix. Since then prominent US studios that previously licensed their content to intermediary companies have brought their content in-house and launched direct to consumer streaming services. Stan now competes with Netflix, Amazon Prime, Disney+, Foxtel's Binge and 10 All Access.

ViacomCBS was trying to gather information in February about whether an expanded streaming service in Australia could work.

Sources previously warned this masthead that ViacomCBS would likely pull its Showtime and Nickelodeon brands from Stan and Foxtel once the contracts expire and bring them into 10 All Access. A rebrand is likely to be on the cards.

Speculation about a bigger and more competitive offering was fuelled in February when ViacomCBS chief executive Bob Bakish announced plans to combine CBS All Access with other Viacom assets like Pluto TV, Nickelodeon, MTV, Comedy Central and Paramount to form a mega-sized streaming service in the US. ViacomCBS also has deals in place with Foxtel and Fetch TV.