WASHINGTON ― President Donald Trump’s insistence on using the White House for much of his nominating convention may be pressuring hundreds of staff into violating a federal law prohibiting political activity on government property, ethics experts said.

While the president and vice president are exempt from the Hatch Act, employees who work at the White House ― both political appointees and civil servants ― are not exempt, meaning any federal employee who helped stage the various video productions at the Republican National Convention this week or the speeches by Trump and first lady Melania Trump could be exposed to the law’s penalties, which can range from a reprimand to being fired.

“This administration has been committing ethics violations right and left,” said Walter Shaub, a senior adviser to the watchdog group Citizens for Responsibility and Ethics in Washington, who added that no previous White House has done anything this egregious. “This is the molten lava core of political activity. There is no event that is more political than a nominating convention.”

On Monday, the Republican National Committee broadcast two videos filmed in the White House. One showed Trump speaking with a half dozen coronavirus responders; in the other, Trump met with some of the former prisoners and hostages his administration has worked to bring home from other countries.

The White House would not detail when those videos were shot or how many federal government employees helped facilitate their production. Nor would it reveal how many staff members and from which agencies are involved in Melania Trump’s speech Tuesday night from the White House Rose Garden or the president’s planned speech Thursday from the South Lawn.

“We have been strictly adhering to guidance given to us by White House counsel,” said Melania Trump’s spokeswoman, Stephanie Grisham. She would not, however, share that guidance with HuffPost.

On Tuesday, Trump ― again from the White House ― carried out two official acts, a pardon of an ex-convict and a naturalization ceremony for five immigrants, with the video played during the convention’s evening programming.

“This is way beyond ‘norm-breaking.’ Trump is hijacking the government that belongs to ‘We the People’ to further his own personal ends,” said Robert Weissman, president of the liberal group Public Citizen. “He is sabotaging and threatening the very existence of our constitutional democracy. For Trump fans who might brush this off, just imagine your reaction if Obama had done something comparable.”

“The only thing President Trump cares about is politics, not doing his job as a thousand Americans die each day from COVID-19, and certainly not whether his actions cross clear ethical boundaries and waste taxpayer money,” said Michael Gwin, a spokesperson for Democratic presidential nominee Joe Biden. “It’s clear this administration has zero regard for the rule of law or whether they’re abusing their public offices for personal political gain.” 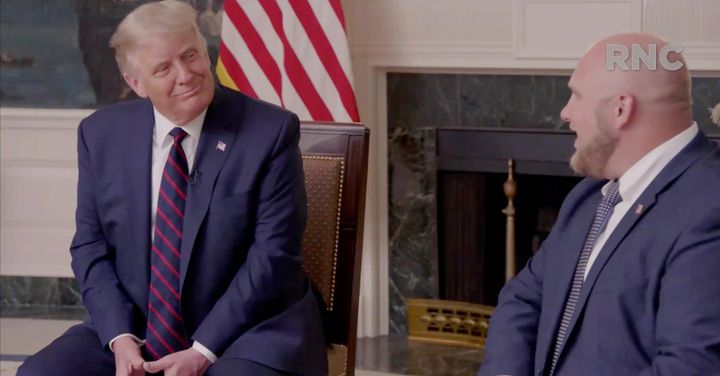 Shaub ran the Office of Government Ethics from 2013 through July 2017, when he left after Trump and his aides refused to follow his guidance. He said that while Trump is generally exempt from the Hatch Act, one section does apply to him, which prohibits officials from coercing or even “directing” their employees to engage in political activity. Doing so is defined as a criminal offense.

The only way for the White House to avoid that would be to make sure every single government employee participating in the event was doing so voluntarily and using personal leave time.

What’s more, the workplace dynamics of the situation make the “voluntarily” element meaningless, Shaub said. “They’re not at liberty to say no. This would be classic misuse of office.”

Of course, so long as Trump is president, any repercussions for employees is unlikely. The Office of Special Counsel last summer found that top aide Kellyanne Conway had repeatedly violated the Hatch Act by politicking from White House grounds and recommended that Trump fire her. Trump took no action, and Conway openly mocked the law. “Blah, blah, blah,” she said when asked about her actions. “Let me know when the jail sentence starts.”

Trump himself, meanwhile, has wiped out the distinction between “official” events ― those paid for entirely by taxpayers and in theory designed to speak to all Americans, not just his supporters ― and political ones, a dividing line the 1939 Hatch Act was meant to codify. He has repeatedly launched into political attacks during official speeches, both in the White House and during visits to other parts of the country. He engages in campaigning during news conferences from the briefing room. His campaign quickly turns video shot at “official” events into advertising.

Trump has also used the power of his office to enrich himself. By insisting on playing golf at his own properties in Florida, New Jersey, Scotland and Ireland, he is able to direct food and lodging payments for his support staff to his own hotels and restaurants. An exact amount is unknowable because the White House refuses to release those records, but HuffPost estimates that at least several million taxpayer dollars have flowed into his own cash registers thus far. That is on top of the $6.9 million his businesses have received from Republican donors from the start of his presidency through June 30, thanks to his campaign and the RNC’s use of Trump properties for office space and fundraisers.

“The central theme of Trump’s presidency is that the government exists to advance his personal business and political interests,” Weissman said. “Neither the law nor ethics has ever mattered. Why should things be any different now?”

Shaub said apart from the inappropriateness of Trump using the White House for his own benefit is its corrosive effect on American moral authority abroad. “The problem is the message it sends to the outside world. What it says is the president doesn’t care about laws,” he said. “This emboldens dictators and wannabe dictators around the world.”