Home » World News » Trump Rails Against Ballot Fraud – But Under GOP Definitions, Committed It In March

Trump Rails Against Ballot Fraud – But Under GOP Definitions, Committed It In March

WASHINGTON – Under definitions used by President Donald Trump and many of his Republican allies, election fraud has been taking place at the nation’s most prominent address: 1600 Pennsylvania Avenue.

There at the White House, Trump and his wife marked ballots that an intermediary had received from elections officers in Florida. Those ballots were then hand-delivered back to West Palm Beach for tabulation — a process that is legal under Florida law, but which Trump himself has equated to fraud.

According to documents HuffPost obtained under Florida’s open records law, the person who picked up the ballots was named Alejandro Garcia — the same name as one of the Republican National Committee’s top Florida operatives.

Garcia declined to discuss the matter with HuffPost and referred questions to RNC headquarters. A spokesman there did not respond to queries.

Using political operatives to handle absentee ballots is among the practices most prone to fraud and abuse by Democrats, many Republicans argue ― even though it was a North Carolina GOP operative in a congressional race who has provided the most dramatic example of this. Leslie McCrae Dowless, 64, faces numerous charges of illegal ballot handling and conspiracy and is accused of systematically collecting, filling and submitting ballots on behalf of the candidate he was working for in 2016 and 2018.

“It’s OK for the RNC Florida guy to harvest Trump’s ballot. But it’s not OK for a friend to harvest a ballot for a neighbor,” Stipanovich said. “This is just voter suppression, is all it is.”

Despite his own use of a mail ballot, though, Trump has recently been on a crusade against their use.

“Mail in ballots substantially increases the risk of crime and VOTER FRAUD!” Trump wrote in an April 11 tweet.

“GET RID OF BALLOT HARVESTING, IT IS RAMPANT WITH FRAUD,” he wrote three days later in a rare, all-capital-letters screed. “THE USA MUST HAVE VOTER I.D., THE ONLY WAY TO GET AN HONEST COUNT!”

Trump has acknowledged voting absentee in Florida’s March 17 presidential primary, but the White House would not say how his and first lady Melania Trump’s ballots made their way from Garcia, who picked them up in Florida on March 9, to the White House, and then back to the elections office in West Palm Beach, where they were dropped off on March 16.

While some states make using third parties to handle ballots a crime, neither Trump nor the first lady appears to have violated any Florida laws by having their ballots delivered to them and then returned to Florida.

“I’m allowed to,” Trump said at an April 7 news conference in which he railed against voting by mail. “That’s called ‘out of state.’ You know why I voted?  Because I happen to be in the White House and I won’t be able to go to Florida to vote.”

In a tweet the following morning, Trump wrote: “Absentee Ballots are a great way to vote for the many senior citizens, military, and others who can’t get to the polls on Election Day. These ballots are very different from 100% Mail-In Voting, which is ‘RIPE for FRAUD,’ and shouldn’t be allowed.”

Trump’s statement, however, is false. Absentee mail ballots work precisely the same way as standard mail-in ballots. And in Florida, any voter — not just those who happen to be out of state — is permitted to vote that way.

Indeed, the state Republican Party there mastered the strategy of banking votes early in the weeks leading up to an election in the 1980s and 1990s, long before Democrats began countering it with their own absentee ballot program.

“We have no-fault absentee. We have been voting that way forever,” said Stipanovich, who, after working for Martinez in the late 1980s, then ran Jeb Bush’s first, unsuccessful campaign for governor in 1994. “Republicans have been historically ahead of Democrats in mining absentee ballots.”

Most experts agree that election fraud is an extremely rare occurrence in a country where over 100 million votes are cast each election cycle. Still, Republicans have recently made it a top priority to pass laws requiring state-issued photo identification documents at polling places and imposing restrictions on early and absentee voting.

Republicans have claimed that they are only interested in stopping ineligible people from casting ballots, while Democrats counter that they are simply trying to make it more difficult for poor people, students, Black people and Latinos from voting at all. Democrats have long campaigned on the idea that if all eligible voters actually voted, Democratic candidates would win far more often.

In some Republican-controlled states, such as Alabama or Texas, what Trump did — have someone other than a spouse or relative handle his ballot — is illegal, and could have been prosecuted. That Trump himself used that method while simultaneously calling it fraudulent is no longer surprising, said Myrna Perez, the director of voting rights and election projects at the Brennan Center for Justice.

“This is not the first time we heard this president say something like that,” she said. “That is a common lie.” 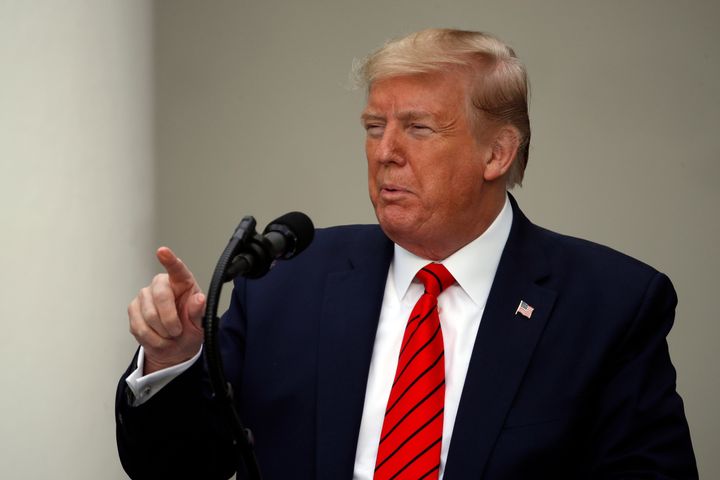 Ironically, Trump made Democrats’ argument about the actual purpose of voting restrictions for them in an interview with Fox News on March 30, explaining why he opposed Democratic efforts to include an expansion of mail voting in the coronavirus relief legislation. “They had levels of voting, that if you ever agreed to it, you’d never have a Republican elected in this country again,” Trump said.

That statement was just one in a number of largely false attacks Trump has made against mail balloting in recent weeks as elections officials around the country in both parties push for more of it in this November’s election.

“I think a lot of people cheat with mail-in voting,” the president said at an April 3 news conference. “It shouldn’t be mail-in voting. It should be: You go to a booth and you proudly display yourself. You don’t send it in the mail where people pick up — all sorts of bad things can happen by the time they signed that, if they sign that — if they signed that by the time it gets in and is tabulated.”

At the briefing four days later where he defended his own ability to vote by mail, Trump claimed, without any evidence: “There’s a big difference between somebody that’s out of state and does a ballot and everything is sealed, certified, and everything else. You see what you have to do with the certifications. And you get thousands and thousands of people sitting in somebody’s living room, signing ballots all over the place.”

Former Florida Democratic congresswoman Gwen Graham said Trump’s statements prove his willingness to say anything to win. “Trump tells his base to grab their pitchforks and protest vote-by-mail, while grabbing a pitchfork and ‘harvesting’ his own ballot. Different day, same story. Lies and hypocrisy from Donald Trump,” she said.

“I do think it’s a glaring example that the effort by Trump and the GOP to restrict voting access isn’t really about the rules, it’s about depressing turnout in constituencies that could swing elections toward Dems,” agreed former Republican congressman David Jolly, also of Florida. “In Trump’s view, a wealthy white Republican voter should be able to access their ballot any way they want or can afford.”