Home » World News » This is how Facebook kills its competition

(CNN)Facebook (FB) is now waging a public relations effort to attack Apple (AAPL) ahead of new iOS data privacy changes that would make it harder for advertisers to track users, in a possible sign of just how much the social network views the move as a threat to its core business.

On Wednesday, Facebook held a press event to trot out small businesses opposed to the change, debuted a new hashtag to discuss it and placed ads in several national newspapers excoriating Apple for the move.
In ads featured in The New York Times, Wall Street Journal and Washington Post, Facebook slammed Apple’s upcoming requirement for users to give explicit permission for apps to track them across the internet. Facebook said the move could be “devastating” to millions of small businesses that advertise on its platform.

The newspaper ads coincide with a new section of its Facebook for Business site called SpeakUpforSmall where Facebook is urging small business owners to share their story and giving them “a place to speak their mind.” It’s also encouraging small business owners to use the hashtag #SpeakUpForSmall on social media to share what personalized ads have meant to them and what it could be like without them.
Facebook, and the businesses who use it for marketing, rely on data tracking to target users with personalized advertising. The social media company, which makes almost all of its revenue from advertising, warned investors in August that Apple’s software changes could hurt its business.

The privacy change was announced at Apple’s Worldwide Developer Conference in June but is delayed until early 2021. During the event, Apple teased how a user would be shown a prompt asking if they want to allow tracking, warning that the data would be used for personalized ads.
Apple has repeatedly attempted to position itself as a defender of consumer privacy, describing the changes in September as stemming from its belief that “privacy is a fundamental human right.” Facebook, which has been criticized for its data privacy practices, is attempting to position itself as a defender of small businesses, many of which are grappling with the fallout from the pandemic.
“We’re standing up for small businesses everywhere,” the ads states. “Many in the small business community have shared concerns about Apple’s forced software updates, which will limit businesses’ ability to run personalized ads and reach their customers effectively. … These changes will be devastating to small businesses, adding to the many challenges they face right now.”
The Facebook for Business website states that about 44% of small businesses have turned to personalized ads to adapt to the outbreak of COVID-19.
In a call with reporters on Wednesday, Dan Levy, Facebook’s VP of ads and business products, said the company wants to sit down with Apple “to figure out a way to move forward.”
“We disagree with Apple’s approach, yet we have no choice but to show their prompt,” the company said in a blog post on its site Wednesday. “If we don’t, we’ll face retaliation from Apple, which could only further harm the businesses we want to support. We can’t take that risk.” 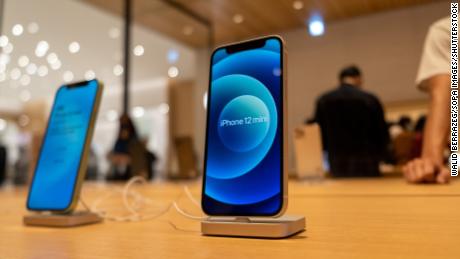 Apple (AAPL) declined to respond to Facebook’s claims, but said it is committed to helping small businesses, such as with its new developer program to accelerate innovation.
The two companies have clashed before over privacy, including very recently. Last week, Facebook-owned WhatsApp criticized Apple over its move to display a summary of an app’s privacy practices before a user downloads it from the App Store, almost like a nutrition label for data collection.

In a statement to Axios, Facebook said Apple should be “consistent across first and third party apps as well as reflect the strong measures apps may take to protect people’s privacy.” In response, Apple told CNN Business the new label requirement also applies to pre-installed apps, such as iMessage, the camera and clock function.
In August, Facebook argued Apple’s in-app fees, such as a 30% fee for transactions that take place on apps, is negatively impacting small businesses during the pandemic. (Alphabet-owned Google requires the same charge).
Source: Read Full Article