Telstra boss Andy Penn settles in for the long haul

Telstra’s “T22” overhaul has given way to a new “T25” growth agenda, one that is likely to leave the telco a very different beast by the time the strategic rebalancing is complete.

Whether CEO Andrew Penn will be around to do a victory lap remains to be seen, but there’s no indication that Penn is looking to hang up the gloves just yet.

Having done the hard yards, it’s unlikely that Penn would be keen to depart without seeing the full fruit of his labor come to pass. If he does decide to stick around until 2025, it will cap off a tumultuous 10-year tenure as a CEO for him, one that started with a nationwide outage of Telstra’s networks.

Things have improved considerably since that baptism of fire for Penn, and he deserves credit for pulling Telstra out of a steadily declining trajectory. 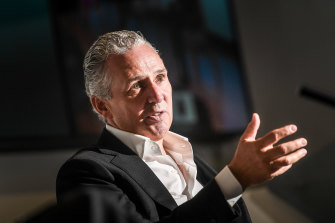 Telstra CEO Andrew Penn is confident the worst is behind the telco giant. Credit:Justin McManus

The telco, for the most part, is learning to live with the National Broadband Network, its margins are no longer entirely captive to the whims of wholesale broadband pricing. It has also managed to reassert its dominance in the mobile market and may yet find itself in a position where it has a meaningful role to play in the future of the NBN.

As for the dividend, the 16 cents a share payment looks secure and provided Penn’s 5G ambitions come to pass there may even be room for some growth. Meanwhile, the infrastructure arm of the business is also primed to deliver a windfall for shareholders by 2023 at the earliest.

None of this would have been possible without T22, which has been Penn’s passion project and a process that has so far claimed almost 8000 jobs and a fair few management scalps as well.

It has also taken almost $3 billon of costs out of the business and there’s more to come as the benefits of Telstra’s investment in digitising its business processes continue to flow through. Telstra is looking to cut another $500 million in costs by June 2025 and while “T22” process focused on reducing headcount and simplifying the products offering, “T25″ is all about customer experience.

Just how much premium Telstra can command on that customer experience will depend on how well its bet on software-driven processes pays off.

From answering customer queries and managing network capacity to spinning out new products and services, software and data will be at the heart of how seamlessly the various divisions inside Telstra can work together.

It doesn’t necessarily scream Google or Amazon, but this is exactly the type of technology ambition a telco the size of Telstra needs to aspire to.

The telco’s current customer service approach, with its growing emphasis on customers using the My Telstra app, is far from perfect but it’s only one piece of a bigger puzzle and will continue to improve as the systems become better equipped to deal with customer needs.

Telstra does have an opportunity to capitalise on changing consumer behaviour, with many customers more at ease in using digital channels during the pandemic-induced lockdowns. Its competitors face similar opportunities. But for the time being, Telstra’s outlook hasn’t been this optimistic in quite some time.

When Penn does finally decide to log off, he will leave behind a very different Telstra. The main consumer business will be powered by a densely rolled out 5G network in the metros, software will be at the heart pretty much everything the telco will do- from customer service to serving remote mining sites. And the lucrative infrastructure business will be in an orbit of its own.

The Market Recap newsletter is a wrap of the day’s trading. Get it each weekday afternoon.