Sydney commuters will be forced to play “spot the difference” after the City of Sydney council decided to rip out bus shelters, public toilets, kiosks and billboards – and replace them with items that look eerily similar at a total cost of about $100 million.

Street furniture in areas such as Paddington, Zetland, Glebe and the CBD will be removed and replaced by new assets from billboard company QMS Media as early as July under plans submitted to the City of Sydney council for approval.

Most of the existing furniture, which owner JCDecaux offered to sell to the council, is expected to be turned into landfill, despite the council’s 2030 sustainability vision, which is focused on reducing carbon emissions. 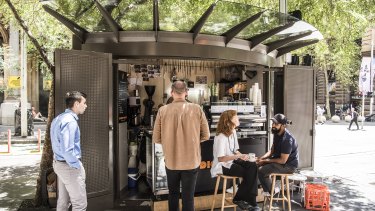 Businesses like cafe Diggy Doos, which operates from a JCDecaux kiosk, will be forced to move. Credit:Steven Siewert

Media industry sources familiar with the refurbishment said it will cost about $100 million for QMS and global advertising giant JC Decaux to complete the changeover. QMS, which was bought by private equity firm Quadrant last year, was confirmed as the successful bidder for the advertising signage rights for the council after a bitter struggle against JCDecaux, which won the contract in the late 1990s before the Sydney 2000 Olympic Games.

Sydney mayor Clover Moore said last June the change in contract to QMS would modernise the streets and provide “significant revenue” for the city through ads that appear on the shelters, kiosks and billboards.

Reasons for the complete refurbishment are unclear, given any changeover could leave the city temporarily without revenue from the ads which appear on the furniture.

The installation of new furniture was not obligatory for the council. Industry sources said JCDecaux offered to sell the existing assets such as bus shelters and kiosks to the council last year after it lost the contract, but the proposal was rejected.

A City of Sydney spokesperson declined to comment on the offer.

“The 22-year-old JCDecaux furniture items were built to the standards of their day. They will be recycled and reused in line with JCDecaux’s sustainability plan,” the City Sydney spokesperson said. “The new street furniture has been designed using the City’s relevant sustainability guidelines.”

“Regardless of that outcome, we are a responsible corporate citizen who genuinely cares about its impact on the environment and we would reuse and recycle whatever we can,” Mr O’Connor said. “However, with the best will in the world, it’s inevitable that a large proportion will end up in landfill.”

Development plans filed to the council for approval show QMS has filed 14 proposals for the replacement of advertising signage. QMS does not require development consent from council for the bus shelters. If successful, installation of that new signage and furniture will cost $12.98 million. That figure is expected to increase as QMS lays out further proposals for items such as kiosks and benches. The signage under proposal is not significantly different to that which already appears on the streets. 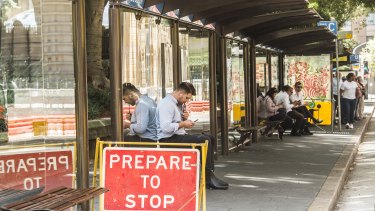 The bus shelters will be ripped up in the CBD and nearby areas as early as July.Credit:Steven Siewert 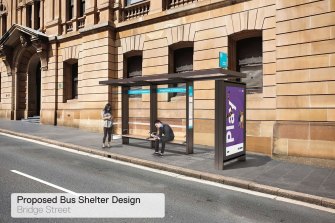 The proposed bus shelters are similar to what is already on Sydney’s streets. The council decided not to buy them from incumbent advertising provider JCDecaux.

The changes could dramatically change the cityscape, but will also affect local businesses that operate from the kiosks and on streets with bus shelters. Local businesses have been under severe pressure in recent years due to the light rail line build and a reduction in commuters caused by the COVID-19 pandemic. Some businesses that rent the kiosks are aware of the situation but are unclear on when or where they will be forced to move.

A City of Sydney spokesperson said kiosk operators were being provided with rent relief, but did not provide details on plans for the future. “We will continue to consult and communicate with kiosk operators,” she said. “We will keep commuters informed ahead of time of any disruptions as we roll out this project.”

Sydney council is separately trying decide on a provider for free public WiFi but has not made a final decision. Minutes from a council meeting on December 14 indicate there are currently two companies shortlisted while a separate document from months earlier says these two companies are ENE Hub and One WiFi. A final decision is expected to be complete by the middle of the year.

JCDecaux first entered the Australian market in 1997 after winning the City of Sydney tender ahead of the Sydney 2000 Olympic Games. A disagreement with council over an ad-supported payphone deal it struck with Telstra in 2017 ended in a failure to secure a new 10-year street furniture contract.

“Installing new payphones in the CBD is not about providing utility, it is a Trojan horse for advertising,” Ms Moore said ahead of the federal court dispute.

The dispute – which was about whether the telco provider could install the payphones under the Universal Services Act – was won by Telstra. An appeal was lost by the telco, which has since filed a special leave application to the High Court of Australia.