Newsroom leaders at Rupert Murdoch's News Corp have accused former prime ministers Malcolm Turnbull and Kevin Rudd of being opportunistic hypocrites and defended "back channel" relationships between editors and politicians at a private all-staff meeting.

During a town hall meeting on Thursday, The Australian editor Michelle Gunn, The Daily Telegraph editor Ben English and Sky News boss Paul Whittaker appeared on a panel to discuss Mr Rudd's campaign against News Corp, a heated debate between senior political writer Paul Kelly and Mr Turnbull on ABC's Q&A and "the dominance of voices on the left of Australian media". 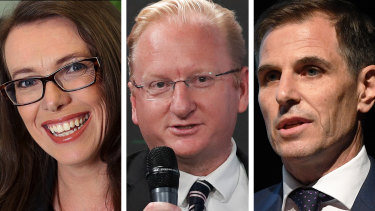 The Australian’s Michelle Gunn, Sky News’ Paul Whittaker and The Daily Telegraph’s Ben English appeared on a panel at an internal meeting.Credit:AAP/Supplied/Alex Ellinghausen

A recording of the panel was obtained by The Sydney Morning Herald and The Age and suggests News Corp's editorial leadership in Australia is taking the campaign by Mr Rudd against it seriously.

"The Australian editorialised for [Rudd] in 2007 and judged that John Howard's time was up and that he’d run out of ideas, essentially. We also strongly endorsed Rudd’s national apology to the Stolen Generation in 2008 and in 2009 we named Kevin Rudd…as The Australian’s Australian of the Year for his leadership at G20 and for his stewardship of the Australian economy during the GFC.

"The point I’m making there is that politicians are very slow to acknowledge the positive and supportive headlines of which there were many in all our papers but of course they are very quick to complain about any headline they disagree with."

The town hall meeting began with an address by executive chairman Michael Miller and was followed by a video clip of the stoush between Mr Turnbull and Mr Kelly, on Q&A. The panel was moderated by News Corp's head of corporate affairs, Campbell Reid.

Sources familiar with News Corp's operations said it is highly unusual for this kind of defence to take place publicly. The commentary was prioritised above other internal topics such as reporting during the coronavirus and measurement platform Verity.

Mr Rudd created a petition on October 10 calling for a royal commission into the strength and diversity of Australian news media which he called a #MurdochRoyalCommission on Twitter.

He said he was concerned the print media was "overwhelmingly controlled" by News Corp which used its power to attack opponents in business and politics. Mr Turnbull was one of 501,876 people to sign the petition, which was tabled in parliament by Labor frontbencher Andrew Leigh. The petition has since prompted a Senate inquiry into media diversity.

Mr Turnbull attacked News Corp in early November for blaming last summer's fires on arson and urged Mr Kelly and other employees to speak out against the organisation. Mr Turnbull blames News Corp for encouraging the leadership spill that led to Scott Morrison becoming prime minister in August 2018.

A News Corp spokesperson previously said that of the 3335 bushfire related stories by The Australian, The Daily Telegraph, The Herald Sun, The Courier-Mail and The Advertiser between September 1, 2019 and January 23, 2020, 3.4 per cent mentioned the words "arson or "arsonists".

"Saying you believe or disbelieve in global warming is like saying you believe or disbelieve in gravity," Mr Turnbull said to Mr Kelly. "James Murdoch was so disgusted, he disassociated himself from the family business. How offensive, how biased, how destructive does it have to be, Paul, before you will say – one of our greatest writers and journalists – ‘It’s enough, I’m out of it’?"

Ms Gunn defended Mr Kelly by describing his commentary and analysis "to be without peer in Australia". "Malcolm Turnbull knows this to be true…and acknowledged as much in that Q&A program," she said. "That’s what was surprising to me about the clip you played at the beginning of this session, Campbell.”

Mr English, who was not Daily Telegraph editor when Mr Rudd was in power, said the former prime ministers had exploited the relationship editors typically have with political leaders.

"The trust that you can build with a premier, a prime minister or an opposition leader or other leaders is critical," he said. "You can develop a back channel relationship that can give you context that you otherwise wouldn’t have the benefit of that can reflect in a positive way the tone in which you present stories…not in a sense of being spun but in a sense of getting a deeper understanding of issues. It’s something that both Rudd and Turnbull exploited."

Mr Whittaker said both politicians were happy to use News Corp went it suited them.

"People have to remember that Kevin Rudd and Malcolm Turnbull very assiduously used the media and in particular used News Corp," he said. "Kevin Rudd twice cut down his own leader. In 2006 he was quite happy to use News Corp to try to undermine Kim Beazley and it worked, he became the opposition leader. Later he cut down Julia Gillard.

"In the same way Malcolm Turnbull used the media to undermine and cut down Brendan Nelson and then of course later Prime Minister Tony Abbott. They’ve been quite happy to use News Corp and other members when it suited their purposes, but they are quick to turn around and blame them.”

Mr Whittaker also defended public criticisms of Sky News' conservative commentators such as Rowan Dean coverage and argued that the broadcaster had "a much greater diversity of voices" than the ABC. Mr Dean, who once said the "renewable energy industry is a massive con being played by billionaires upon gullible climate believers", is also regular columnist at The Australian Financial Review.

"We run news programming during the day and at night we run opinion based news programming that often shines a light on areas that our competitors either refuse to discuss or worse pretend don’t exist," Mr Whittaker said. "I would argue that Sky has a much greater diversity of voices than the public broadcaster, for example, where you would struggle to find a conservative news point.

"This is our brand value proposition that separates us from the dominance of voices on the left of Australian media."