A Republican elected official in Cape May County, New Jersey, recently resigned from his post after posting vulgar, manipulated images of Democratic vice presidential nominee Kamala Harris on social media. But now he’s saying he never officially stepped down and he expects his seat back, vowing to go to court to reclaim it.

Hobard “Hobie” Young was a member of the Upper Township Committee until last week, after he caused an uproar by sharing doctored images of Harris in sexually suggestive poses on his Facebook page. People shared his posts with comments of disgust and anger. Young has since deleted the images and, it appears, his Facebook account.

Young, who had served on the committee for seven years, announced his resignation “effective immediately” on Oct. 19 on Facebook.

“Those that know me know that this was not intended to offend others in anyway [sic], ” he said. “Just poor I judgement [sic] politically on my part.” 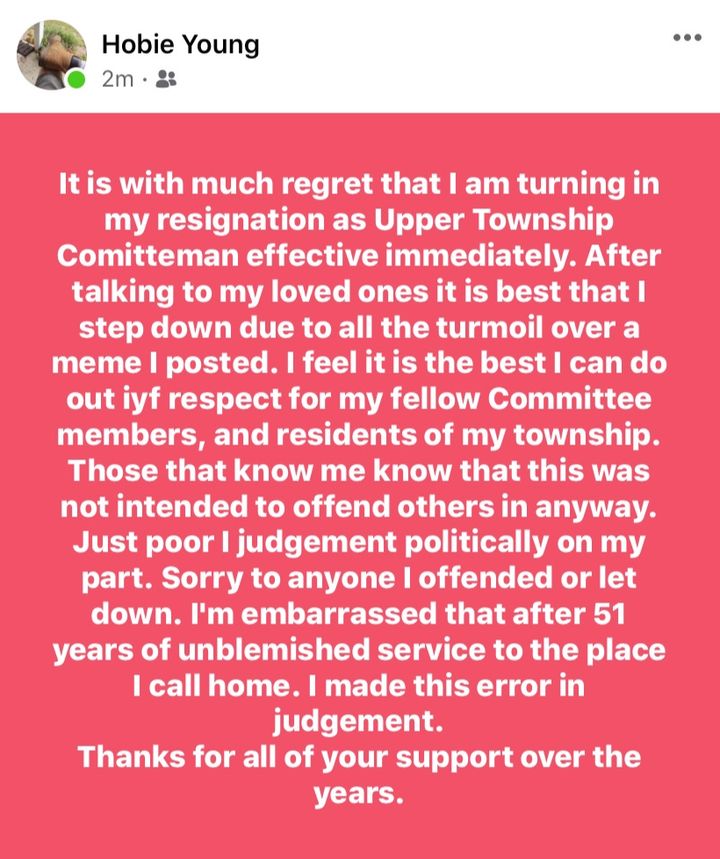 That appeared to be the end of it until Monday night when Young showed up during a virtual, public Upper Township Committee meeting and said he spoke to an attorney who “totally disagrees” with the committee lawyer’s opinion that he formally resigned.

“I did not send in a signed letter stating my resignation. I sent an email to Barb and told her that I was going to resign,” he said, referring to committee clerk Barbara Young, who is no relation to Hobie Young.

At one point, when Young thought he was muted, he could be heard talking to someone in the room with him and calling the committee members “lying assholes.” He apologized when he realized his audio was still on.

You can watch the exchange here. It begins around the 1:50 minute mark.

It’s not clear how Young could get his seat back since he publicly resigned and the committee has moved on to begin filling the seat.

Young did not respond to a request for comment on why he wants the seat back and whether he considers it appropriate to remain in public service after sharing vile photos of Harris.

Upper Township Mayor Richard Palombo did not respond to a request for comment on whether he believes Young has any case in court and if the mayor or other committee members are open to Young returning to the panel.