President Andres Manuel Lopez Obrador’s party has filed a complaint over alleged misuse of internal funds, widening a rift within the group and testing a government that pledged to purge Mexico of graft.

Morena’s current leader Alfonso Ramirez Cuellar said the political party filed a criminal complaint with federal prosecutors to investigate the use of 395 million pesos ($17.5 million) of internal funds that were allegedly spent on non-existent projects.

“We finished an investigation and it is in the hands of civil and criminal courts and they will have to decide,” Ramirez Cuellar said in a telephone interview Thursday. “We need to act with transparency and honesty. Morena is an institution that has to set an example.”

Lopez Obrador won a landslide election two years ago on the promise to root out systemic corruption in Mexico and has made his anti-graft policy the main pillar of his government. The allegations risk tarring his administration’s anti-corruption drive if wrong doing is confirmed to have taken place at the government’s party.

The case also threatens a rupture within Morena, the party Lopez Obrador started in 2011, which is already struggling with infighting as it prepares to defend its majority in the lower house of congress in mid-term elections next year.

Read More: Stay Radical or Get Pragmatic? AMLO’s Party Has to Decide

The alleged irregularities took place when Yeidckol Polevnsky served as Morena’s president, but the complaints had been filed against the alleged irregularities and “whoever” is responsible, Ramirez Cuellar said, declining to name the people they cite in the case. Polevnsky ran the party from late 2017 until early this year when she wasousted amid a contested fight for leadership.

Ramirez Cuellar took over as an interim leader, but Morena still has to organize a process to select a new president and Polevnsky has planned to run again in the internal contest.

“This is a maneuver to disqualify Yeidckol from the race for the presidency of Morena,” said Raul Correa, a spokesman for Polevnsky, in an interview. “This isn’t right. During a time when we need to be united to defend our government from the attacks of the right wing, it seems he’s working on their side,” Correa said, referring to Ramirez Cuellar.

On Monday, daily Reforma publishedaudio of Ramirez Cuellar telling party leaders that civil and criminal lawyers would audit documents related to payments for works that were never carried out.

Polevnsky said in a tweet Tuesday that the building purchases were authorized by the party’s national council. “If they have any elements, file a complaint,” she wrote. 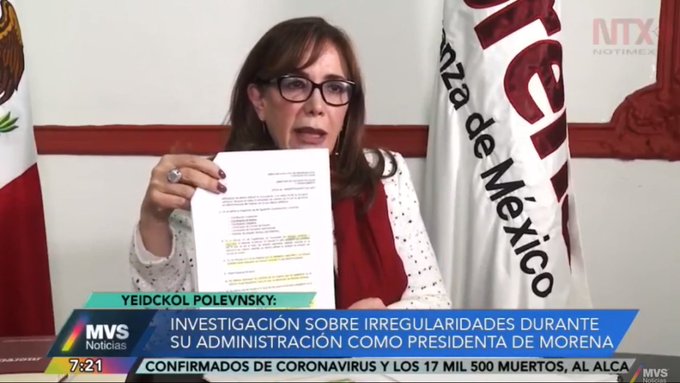