Home » World News » Joe Manchin poses a threat to raising the minimum wage, even though 250,000 West Virginians would benefit from the increase

Joe Manchin poses a threat to raising the minimum wage, even though 250,000 West Virginians would benefit from the increase

Congressional Democrats are scrambling to keep their $15 federal minimum wage proposal included in President Joe Biden’s $1.9 trillion stimulus plan this week as they face an unlikely obstacle: centrist members of their own party.

Sen. Joe Manchin of West Virginia and Sen. Kyrsten Sinema of Arizona, two of the party’s most moderate Democrats, have both said they are opposed to using budget reconciliation — a maneuver that allows the majority party to speed through high-priority fiscal legislation without support from the minority party — to pass the minimum wage hike.

The proposal was formerly known as the Raise the Wage Act of 2021 and would incrementally increase the federal minimum wage from $7.25 to $15 by the year 2025.

Progressive members of the party, like Sen. Bernie Sanders of Vermont, have signaled their confidence that the legislation will be included in Biden’s first COVID-19 stimulus package, but Manchin, in particular, has doubled down on his opposition in recent days.

Now, the former governor of West Virginia is facing criticism from constituents and activists back home who support the proposed increase.

West Virginia is one of the poorest states in the country

Data from the Economic Policy Institute indicates that a quarter of a million West Virginians, about 14% of workers in the state, would directly benefit from a $15 minimum wage.

Those impacted workers would take home, on average, nearly $4,000 extra dollars each year, the economic policy institute estimated. The total annual wage increase for all affected West Virginia workers would be $987 million annually.

Manchin reaffirmed his opposition last week at a virtual meeting with West Virginia Poor People’s Campaign, a progressive group fighting for working-class residents in the state.

Though the meeting was closed to the media, attendees told reporters in an online press conference immediately afterward that Manchin “refused to budge,” according to The Guardian.

“I feel like he’s got his head in the clouds and he doesn’t understand what’s happening to poor people in West Virginia,” Brianna Griffith, a restaurant worker and rafting guide told the outlet.

But Manchin, along with other moderates and most conservatives, is worried that the incremental increase could end up doing more harm than help.

A Congressional Budget Office report estimated the legislation, if passed, would increase the cumulative budget deficit by $54 billion in the next decade. Prices for goods and services would increase as a result of paying workers more and 1.4 million jobs would be lost, the report said.

But the CBO also estimates the hike would pull 900,000 workers out of poverty and pump $333 billion back into the economy. 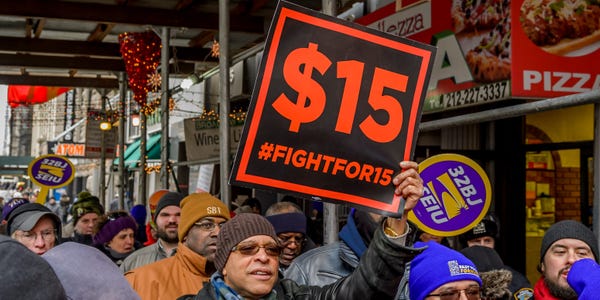 The Economic Policy Institute conducted its own investigation into the possible outcomes of the increase and estimated that raising the federal minimum wage to $15 an hour by 2025 would lift pay for nearly 32 million workers across the country — almost 21% of the US workforce.

The raise would be particularly beneficial to people of color and women. Nearly a third of African-Americans and a quarter of Latinos would get a raise if the proposal was employed. Nearly 1 in 4 of those who directly benefited would be Black or Latino women, the study found.

Sanders has ramped up his support for the legislation in recent days, arguing that the Congressional Budget Office’s report provided ample evidence that increasing the minimum wage would directly affect the federal budget — a requirement for any legislation passed through reconciliation.

Lawmakers are now waiting for a final decision from the parliamentarian, the Senate’s official advisor on procedural matters, on whether or not the wage increase can be passed through reconciliation. Politico reported that Democrats and Republicans are both expected to meet with the parliamentarian Wednesday to make their separate cases and that her ruling could soon follow.

Elizabeth MacDonough has held the position of Senate parliamentarian since 2012, when Senate Majority Leader Chuck Schumer appointed her to the position. She is only the sixth person to serve in the role since it was created in 1935.

Even if MacDonough decides in favor of the Democrats, the party will still be faced with Manchin. In order to pass legislation through reconciliation, the party will need every single member plus tie-breaker Vice President Kamala Harris to vote in sync.

Manchin has signaled he’s willing to compromise on the issue

Manchin has publicly said he would support something “responsible and reasonable” when it comes to raising the federal minimum wage and has proposed a smaller increase of $11 an hour numerous times.

The senator told CNN congressional correspondent Manu Raju Monday evening that if the parliamentarian allows the wage hike to be passed by reconciliation, he will try to amend the legislation to $11 an hour.

He argued the move would allow the party to compromise and successfully pass the stimulus package. But for progressive West Virginians back home, that may not be enough.

“You’re just frazzled,” Pam Garrison, a member of West Virginia Poor People’s Campaign told the Guardian after meeting with Manchin. “If you’ve never lived in poverty, you have no idea what it does to you.”