Jeff Bezos is set to beat fellow billionaires Elon Musk and Sir Richard Branson into space when he shoots off next month aboard one of his own Blue Origin rockets, the latest example of his trademark single-minded nature and competitiveness.

Frequently this obsession pays off for the richest man in the world and founder of global behemoth Amazon but it’s also evident in his failures, including his foray into “single cow burgers” made from the meat of just one cow.

While the initial feedback from customers was promising, describing the burgers as “huge, juicy and delicious” Bezos was not happy and complained about difficulty in opening the packaging and fat dripping onto his barbecue. 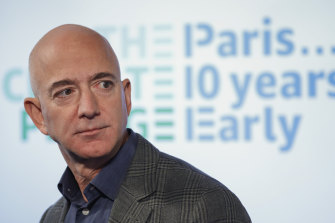 Jeff Bezos is stepping down as chief executive of Amazon next month.Credit:AP

According to Brad Stone, the author of a new book, Amazon Unbound, the single cow burger shows how innovation at the company is intrinsically linked to its founder and chief executive.

“Employees didn’t ‘work backwards’ from their idealised customers, who had never asked for such a creation,” Stone writes. “They worked backwards from Bezos’s intuition and were catering to his sometimes eclectic tastes.”

In an interview with The Age and The Sydney Morning Herald, Stone says Bezos preparing to step down as chief executive of Amazon on July 5 is a pivotal moment both for the 57-year-old entrepreneur and the company he started in 1994.

Back then Bezos spotted an opportunity to sell books online and driven by Amazon’s first company motto of “get big fast” he quickly expanded across retail categories .

Stone writes Bezos would ask disappointing underlings, “why are you wasting my life?” or “I’m sorry, did I take my stupid pills today?”

Bezos prioritised hiring the smartest people over the best leaders and advocated for “stack ranking”, where employees were rated by their managers on the basis of job performance, with the lowest performers pushed out the door.

One Amazon executive said Bezos once told him: “If we ever appear in the “100 best places to work in America” you’ve screwed this place up.”

However Amazon’s corporate culture which hammered employees to move fast and never break things alongside Bezos’s obsessive micro-managing was also “unmistakably effective” according to Stone.

It has been the source of numerous concerns about health and safety at Amazon but also encouraged innovation and inspired electronic reader the Kindle, voice-controlled speaker Alexa and the company’s wildly successful internet hosting division Amazon Web Services.

A company of Amazon’s size also doesn’t back down, Stone writes.

Amazon has failed to hit its initial market forecasts in Australia with sales reaching $1 billion last year, Stone says this is only likely to make Amazon intensify its efforts here.

“I think with one conspicuous exception of China, we have yet to see Amazon retreat anywhere,” he said. “If anything else Amazon doubles down on countries like Australia with large economies that are embracing the internet.”

One Amazon executive said Bezos once told him: “If we ever appear in the “100 best places to work in America” you’ve screwed this place up.”

Stone predicts Amazon will open more fulfilment centres and data centres in Australia and look to local production of shows and movies for Prime in Australia.

“This is the playbook that Amazon has rolled out elsewhere, really localising their service, and what they offer to different countries, and I expect that we’re probably just in the very earliest innings of that for Amazon and Australia,” he says.

Amazon’s war chest has been boosted by the coronavirus pandemic which proved to be a “shot of steroids” for it and saw the company’s international arm become profitable for the first time.

“For a solid year its competitors were handicapped and people got new habits. They learned how convenient it can be to order groceries online,” Stone says. 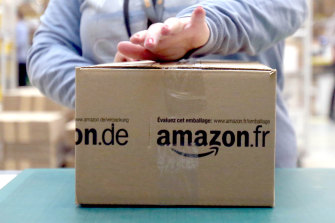 Amazon’s value soared during the pandemic.Credit:AP

By the end of last year, Amazon boasted a $US1.6 trillion ($2.1 trillion) market capitalisation and Bezos himself was worth more than $US190 billion, with his wealth increasing by more than 70 per cent during the pandemic.

“It was both a breathtaking achievement and a startling juxtaposition with the economic devastation and strife in Amazon’s fulfillment workforce wrought by the virus,” Stone says.

While many people were surprised by Bezos’s announcement that he would step down as chief executive, Stone says the move had been coming for a while and follows a period of significant personal and professional change for Bezos.

The tech impresario had been pulling back from the day-to-day running of many divisions of Amazon for quite a while and with the collapse of his 25-year marriage to MacKenzie Bezos was spending a lot of time with new girlfriend Lauren Sanchez.

“Bezos is off graduating into a larger world beyond Amazon, focusing on other things,” Stone says. “Still caring a lot about Amazon and devoting his time to building new projects at the company, but increasingly seeing himself as an inventor and wanting to spend his time on new things and new experiences.”

Flying to space a fortnight after he steps down as chief executive is perhaps the ultimate celebration of one of the most epic runs in modern business history and it remains to be seen how Amazon will fare without its obsessive founder at the helm.