Hannity: Kyle Rittenhouse a victim of media's 'rush to judgment' 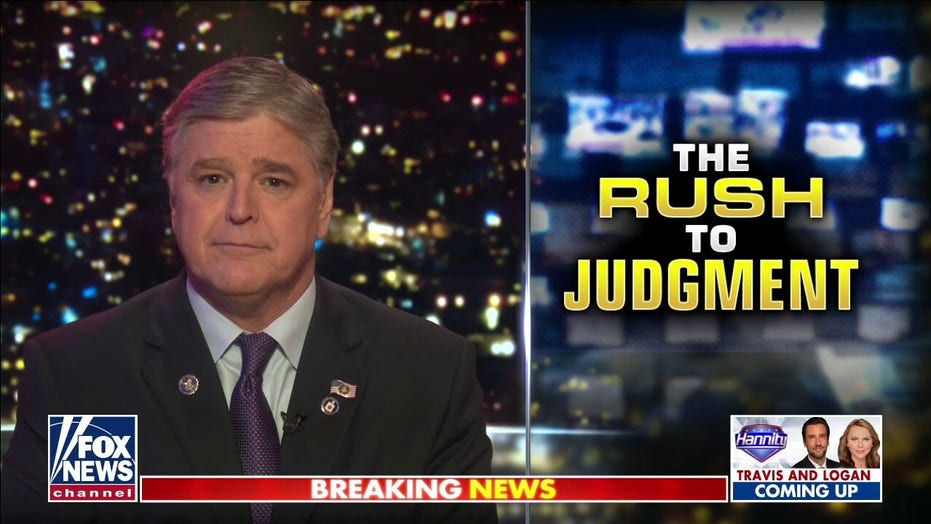 Sean Hannity shows how Kyle Rittenhouse is the latest in a long line of victims of Democrats’ premature judgment on ‘Hannity.’

Kyle Rittenhouse, whom President Biden has suggested is a “white supremacist,” is a victim of powerful Democrats’ “rush to judgment,” Sean Hannity said in his opening monologue of “Hannity” Wednesday night.

The Rittenhouse trial jurors “now are face-to-face with an angry mob that, in all likelihood, they’re hearing with their very own ears,” he said. “This is what happens when powerful people in the media, in Washington, in the swamp…rush to judgment. And sadly, it happens every single time over and over again [with] the same cast of characters. The media mob…get it wrong and innocent people…pay the price.”

Hannity said that Rittenhouse is just the latest victim of establishment liberals’ rush to judgment – receiving similar treatment as, among others, Nicholas Sandmann, Darren Wilson and Richard Jewell.

Their lives were “ruined all because liberals care more about optics and a political narrative than they care about something called truth and justice and our Constitution,” Hannity added.

He reported that Rittenhouse trial Judge Bruce Schroeder “has received hundreds of vile messages since this trial has begun, including death threats to his entire family.” Protesters gathered outside of the trial’s courthouse have vowed to riot and become violent if Rittenhouse is found not guilty.

This week, MSNBC commentator Joy Reid said that like their female Karen counterparts, White men “can get away with” crying after practicing “White vigilantism.” She also said that Judge Schroeder “seems so clearly on [Rittenhouse’s] side,” having “done everything but…offered to adopt [him].”

Hannity concluded his monologue by arguing that the trial “looks like a very clear-cut case of self-defense, according to Wisconsin law.” He added that “you can thank the media mob…[and] Biden” for “any violence, any rioting that follows” the jury’s verdict.