GOP Rep. Doug Collins says election fight is 'NOT over' 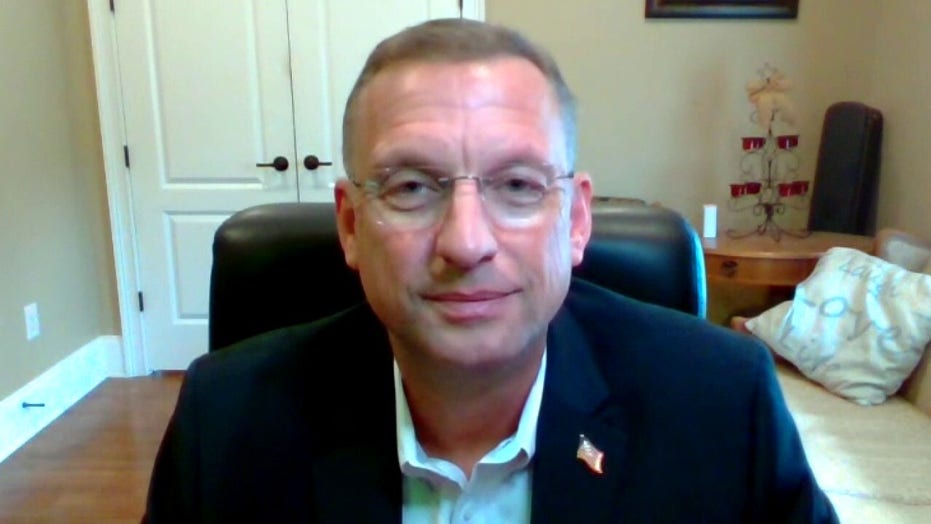 Rep. Doug Collins joins ‘America’s News HQ’ to discuss the differences between Trump and Biden’s campaign approaches ahead of the first 2020 presidential debate.

GOP Rep. Doug Collins, a staunch ally of President Trump, slammed the media for calling the presidential election in favor of Joe Biden and vowed to fight on.

“No matter what the media tells you, this is NOT over,” Collins wrote on Twitter. “It’s not over until every LEGAL vote is counted.”

“This is America. We the PEOPLE decide who our next President is. NOT the media,” he said.

Collins unsuccessfully ran against fellow Republican Sen. Kelly Loeffler for a Georgia Senate seat. Loeffler will face off in a runoff against the Democrat, Rev. Raphael Warnock.

Loeffler was competing against Collins for the conservative vote, with both candidates positioning themselves as staunch Trump supporters.

While neither received an official endorsement from the president, Loeffler had the support of some prominent leaders in the Republican Party, including Senate Majority Leader Mitch McConnell, R-Ky.

The race is particularly poignant because Georgia’s two Senate seats, both headed to runoffs, could determine which party controls the Senate.

Fox News projected Biden to win the presidency after calling Pennsylvania and Nevada in his favor. But Trump has not conceded.

The president earlier released a statement that said his legal team would fight the results in court on Monday, and accused Biden of "rushing to falsely pose as the winner." Trump's legal team has filed a litany of lawsuits alleging voter fraud and procedural violations surrounding the vote count.

Sen. Josh Hawley, R-Mo., on Saturday panned media projections that favor Biden and said Americans should wait for recounts and legal challenges to be resolved before declaring who will be president.

"The media do not get to determine who the president is," Hawley said. "The people do. When all lawful votes have been counted, recounts finished, and allegations of fraud addressed, we will know who the winner is."

Sen. Lindsey Graham, R-S.C., saida he will have the Senate Judiciary Committee investigate an allegation of postal service misconduct in Pennsylvania that he received from the Trump campaign.

"Election outcomes are not determined by media outlets but certified, accurate vote counts," Graham said of an affidavit from a postal worker that accused other postal workers of backdating mail ballots. "Officials in Pennsylvania should take allegations … seriously before certifying a final outcome."

Other Republicans, however, congratulated the former vice president.

"Ann and I extend our congratulations to President-elect Joe Biden and Vice President-elect Kamala Harris," Sen. Mitt Romney of Utah said in a statement. "We know both of them as people of good will and admirable character. We pray that God may bless them in the days and years ahead."

Maryland's Republican Gov. Larry Hogan wrote: "Congratulations to President-elect Biden. Everyone should want our president to succeed because we need our country to succeed. We have great challenges ahead of us as a country. Now more than ever, we need to come together as Americans."

Legal action from the Trump campaign or recounts are highly unlikely to close the margins that Biden has opened up in Pennsylvania and Nevada — which are the calls that put Biden over 270 electoral votes, the number needed to win the presidency — and in other states that have been called by the Fox News Decision Desk. Even if some misconduct or fraud is found, and some votes are changed or thrown out, it appears impossible that any such challenges could close the gaps between Biden and Trump in those states, based on the history of past recounts and legal challenges.

Trump, who was playing golf at the time Fox News and other networks called the race for BIden, issued a statement saying Biden should not be declaring victory.

"We all know why Joe Biden is rushing to falsely pose as the winner, and why his media allies are trying so hard to help him: they don’t want the truth to be exposed," the statement said. "Beginning Monday, our campaign will start prosecuting our case in court to ensure election laws are fully upheld and the rightful winner is seated. The American People are entitled to an honest election: that means counting all legal ballots, and not counting any illegal ballots."