New York (CNN Business)“Fall Guys: Ultimate Knockout” has taken the gaming world by storm. The game from indie publisher Devolver Digital has now sold more than 7 million copies on the PC games store Steam and an undisclosed number on PlayStation, putting it well on its way to out-sell some of the most popular video games on the market over a similar one-month launch period.

“Fall Guys” might be the most whimsical battle royale there is. You play as a jellybean-like creature, trying to make your way through mazes, jumping challenges and other game show-like activities to become the best out of 60 players.
It was released on August 4 and is available on PlayStation 4 and Windows for $19.99. It has hit a peak of 439,000 players at a single time.

To put that into perspective, “Fortnite” had 12.3 million players log on for Travis Scott’s in-game concert, it tweeted in April, although Fortnite is on virtually every platform, including Xbox, PS4, Nintendo Switch, macOS and PC, and it throws splashy events that attract fans of music and cinema. In May 2018, it set a new record at the time by racking up $318 million in sales in a single month.
Although Sony hasn’t disclosed how many copies of the game have sold on console, PlayStation UK’s official Twittter confirmed Wednesday that “Fall Guys” is the most downloaded game of all time, worldwide, on the PlayStation Plus subscription service.

“Fall Guys” also offers in-game purchases, such as different outfits for your jellybean, but does not disclosed how much revenue it’s generated from those sales. The game is set to be one of the industry’s most lucrative this year. 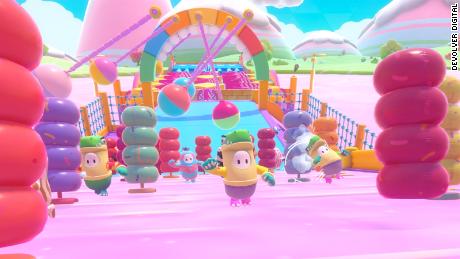 But it didn’t look that way at first. Its developers feared the game would not attract enough players.
“When you launch a mass multiplayer game, one of the things is you just don’t know how many people are going to show up. And you can’t start a game because you need at least 60 people,” said Jeff Tanton, creative director at Mediatonic Games, the studio behind “Fall Guys,” “It seems ridiculous now, when you look at the numbers we’ve got.”
The game requires a total of 60 people to start a round, so the Mediatonic Games developers kept “Fall Guys” simple, releasing only a single game mode and little other content.
That approach has worked wonders for the game’s popularity. Queue times for the game tend to be short.
Joe Walsh, game designer at Mediatonic, told CNN Business in an early August interview: “We decided that it was better to have a much more focused, more polished experience than to spread ourselves too thin and have something that starts to fall apart… I think the numbers that you’re seeing is a testament to that.”

The game has attracted interest from people who don’t typically play third-person shooters and other competitive multiplayer games.
“There’s a whole bunch of people that don’t have much interest in games, but seem to know about and want to play ‘Fall Guys,’ and I think that’s where a lot the numbers are coming from,” said Tanton.

There are no guns in “Fall Guys,” the better to help the game stand out from the competition.
On Thursday, “Fall Guys” season 2 will be unveiled, which will expand the game’s content and help determine if the game can hold onto its avid fan base.
Source: Read Full Article