Australian mining giant Fortescue has lifted its shipments of iron ore by 5 per cent as strong Chinese demand underpins this year's stunning price rally for the steelmaking raw material.

While many of Australia's other top export commodities such as coal and natural gas have faced sharp falls due to various impacts of the coronavirus pandemic, iron ore has soared and remains above $US110 a tonne, providing a windfall to the nation's largest miners and the federal budget. 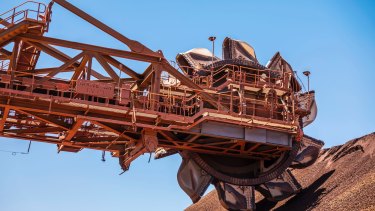 The price of iron ore, Australia’s top export, has defied repeated predictions it is overdue for a fall.Credit:Tony McDonough

Fortescue, backed by billionaire Andrew "Twiggy" Forrest, told investors on Thursday it had shipped 44.3 million tonnes of iron ore for the September quarter, while its cargoes achieved an average price of $US106 per dry metric tonne across the period, compared to $US85 a year earlier.

"Robust demand from our customers contributed to an increase in revenue realisation, 31 per cent
higher than the June quarter," said Fortescue chief executive Elizabeth Gaines.

Iron ore is Australia's most valuable export, cracking $100 billion in annual export earnings for the first time in history this year.

The price of the commodity has been lifted by resilient demand from China's steel mills ramping up output to stimulate the economy and softer-than-expected output from overseas iron ore producers, such as Brazil's Vale. China is by far the world's biggest consumer of iron ore, buying more than 70 per cent of seaborne cargoes.

Analysts on Thursday said Fortescue's quarterly operational results were strong and broadly in line with expectations.

Analysts on Thursday said Fortescue's quarterly operational results were strong and broadly in line with expectations. While some seasonal weakness in the iron ore price was expected in the December quarter, the Royal Bank of Canada's mining team said the 12-month price outlook remained positive amid resilient Chinese demand.

"We expect FMG will find support from investors given the price environment as well as potential for additional stimulus," they said.