President Biden travels to Wisconsin on Tuesday, as he steps up his efforts to sell a nearly $1 trillion infrastructure plan the White House struck with both Democrats and Republicans in Congress.

The president will hit the road again on Saturday, when he will be in Michigan as part of his administration’s “America’s Back Together” tour over the July 4th holiday weekend, marking the country’s progress in recovering from the coronavirus pandemic.

The stop in Michigan will be Biden’s third since the start of his presidency on Jan. 20, and the trip to Wisconsin will be his second since taking over in the White House. The president has also traveled three times his native state of Pennsylvania, twice to Georgia, and once to North Carolina since the start of his administration. 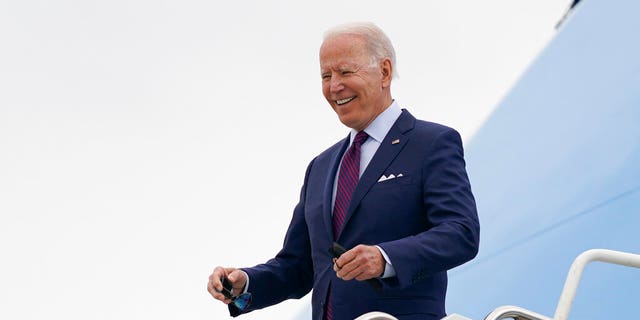 What all these states have in common is that they were key battlegrounds in the 2020 presidential election and will likely hold crucial Senate, House and gubernatorial contests in the 2022 midterms. The Democrats are aiming to hold on to their fragile House and Senate majorities in next year’s elections.

Elleithee noted that the president’s “going to begin selling the bipartisan infrastructure deal and he’s going to put pressure on Republicans, for example in Wisconsin, people like (Republican Sen.) Ron Johnson, who’s up for reelection next year, while selling the benefits of this plan.”

Before leaving the White House enroute to Wisconsin, Biden tweeted “Let’s be clear about how big a deal the Bipartisan Infrastructure Framework is. It’s the largest federal investment in: – Public transit – Clean energy transmission – Clean drinking water – In American history.”

To be clear, the president isn’t stopping exclusively in electoral battlegrounds. And his visits to the battleground states are official trips that aim to promote his administration’s pandemic recovery efforts, the massive COVID-19 release package that he signed into law early in his administration, his American Jobs Plan and American Families Plan spending bills that he would like to pass through Congress, as well as a trip to spotlight the economy and one to promote electric vehicles as part of his climate change and clean energy push.

And Biden is far from the first president to stop in key electoral states to push policy objectives.

But pointing to the battleground visits, Elleithee said that the trips are a “messaging opportunity from both a legislative and an electoral standpoint.”

Elleithee, a senior spokesman for Hillary Clinton’s 2008 presidential campaign who later served as communications director for the Democratic National Committee, noted that Biden’s message during his successful 2020 presidential campaign was “he can help unify the country and he will get results. He’s going to these battleground states, where he’s going to be able to sell both of those things. He’ll be able to sell his ability to pull together a bipartisan infrastructure bill that’s going to help people. Unity and results.”

Another sign of the political aspects of Biden’s latest travels — his trips this week are being accompanied by an ad blitz being launched by the Democratic National Committee (DNC) touting the administration’s efforts in battling the COVID crisis. The narrator in the commercial declares that the U.S. is “coming back” following the nearly year and a half long fight against the pandemic and that the nation’s “leading the world out of a global pandemic.”

Biden’s travels also have some political pundits wondering if a 2024 reelection is on the mind of the president and his political advisers.

But a Democratic consultant close to the administration, who asked for anonymity to speak more freely, told Fox News, “I don’t think it’s top of mind for them.”

There’s been intense speculation – dating back to the launch of his 2020 White House bid over two years ago – whether the now-78-year-old Biden would run for a second term. The former vice president made history last November when he became the oldest person ever elected president.

Asked in March at the first formal news conference of his young presidency about his 2024 plans, Biden said, “My answer is yes. I plan on running for reelection. That’s my expectation.”

If he campaigns for reelection in 2024 and wins, Biden would be 82 at his second inaugural and 86 at the end of his second term.