Biden speaks on vaccines for children and COVID response, does not take questions

President Biden on Thursday continued his tradition of turning his back on reporters and walking away, ignoring shouted questions at the conclusion of prepared remarks.

Biden, speaking from the controversial set across the street from the White House about the response to COVID-19, offered his signature “may God protect our troops” closing line before showcasing his familiar move of quickly exiting as reporters barked “Mr. President” over each other.

“President Biden walking away there without taking any questions from the press core assembled,” Fox News anchor John Roberts said as the event wrapped up. 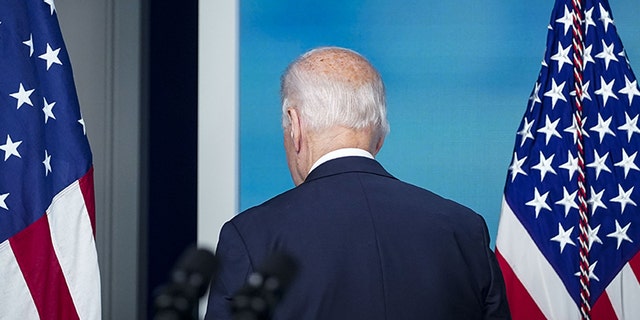 On Wednesday Biden also turned his back on the press following a bevy of bad news about the economy. Last week, Biden did the same thing following his remarks on a bleak September jobs report. Many have noticed the newfound trend:

Biden has quickly developed a reputation for failing to engage with reporters during his first nine months on the job. Last month, he declined to call on U.S. reporters after British Prime Minister Boris Johnson took questions from reporters from the United Kingdom during an Oval Office meeting. White House reporters made a formal complaint about not getting any formal questions while the British press asked away.

In August, he blew off a question about Afghanistan after offering to take questions at the Federal Emergency Management Agency headquarters during comments about Hurricane Ida.

“I’m not gonna answer on Afghanistan now,” Biden interjected before walking away from the podium.

Biden has also repeatedly implied that his handlers set the rules and determine when and where he’s allowed to take questions from the press.

Biden will have an opportunity to take questions later on Thursday after he participates in a bilateral meeting with the President of Kenya.