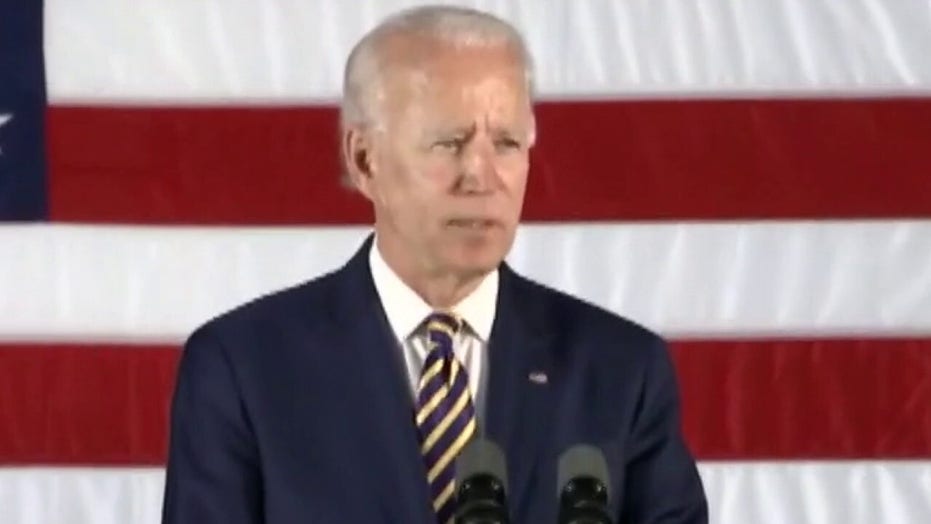 Joe Biden's Fourth of July message focused on America's long history of racial injustice — from slavery to George Floyd's death — as he called for Americans to strive to achieve the country's founding ideal of equality.

Biden said America's history is no "fairy tale" as the country has never lived up to the words of the Declaration of Independence that  "all men are created equal."

But the presumptive Democratic presidential nominee released a hopeful video that the country can turn the tide after "more than 200 years of systemic racism."

"We have a chance now to give the marginalized, the demonized, the isolated [and] the oppressed a full share of the American Dream," Biden said in a new campaign video. "We have the chance to rip the roots of systemic racism out of this country."

Biden's acknowledgment of America's flawed history and the "racism that has torn us apart" comes a day after President Trump delivered a defiant Mount Rushmore speech where he stood up to the "cancel culture" of racial justice activists and those who are trying to wipe out American history, tear down statues and defame heroes.

The president asserted that recent attacks on the nation's monuments were symptoms of a "left-wing cultural revolution" that was threatening to "overthrow the American Revolution."

While Trump has staked his Independence Day campaign message on a strong defense of American monuments — even deploying a special federal unit for the July 4 weekend to protect statues from potential vandalism — Biden has concentrated on reckoning with America's imperfections.

"We're all created equal. We've never lived up to it — but we've never stopped trying," Biden tweeted. "This Independence Day, let's not just celebrate those words, let's commit to finally fulfill them."

TRUMP GIVES OPTIMISTIC INDEPENDENCE DAY MESSAGE, SAYS US IS ‘COMING BACK’ AFTER ‘TERRIBLE PLAGUE FROM CHINA

Biden has drawn distinctions between taking down monuments of Confederate leaders who fought to defend slavery and past presidents who own enslaved people, including Thomas Jefferson.

"The idea of comparing whether or not George Washington owned slaves or Thomas Jefferson owned slaves, and somebody who was in rebellion committing treason trying to take down a union to keep slavery, I think there’s a distinction there,” Biden said earlier this week.

"Our founding promise has never been guaranteed," Obama tweeted "Each generation has been called to bring us a little closer to our highest ideals—and history’s calling on us right now. So let’s all do whatever we can to help [Biden]."

Trump's homage to Independence Day will continue at the White House tonight with a "Salute to America" event before the fireworks on the National Mall.