Bank of America, Lowe's, and Truist Financial Corporation sponsored a United Way critical race theory "Racial Equity 21-Day Challenge" claiming that America is systemically and institutionally racist, encouraging participants to "decolonize [their] mind[s]" and to get "woke at work," and urging white people to "cede power to people of color."

Christopher Rufo, a senior fellow at the Manhattan Institute, first revealed the critical race theory challenge, presenting documents he obtained from a whistleblower. Rufo reported that Bank of America encouraged North Carolina employees to undertake the "Racial Equity 21-Day Challenge," but support for the critical race theory training extended far beyond that Bank of America branch.

"Black and Brown people continue to face tremendous obstacles to achieve economic mobility across our country and here in the Charlotte region. This project allows each of us to examine the systems and policies that have historically disadvantaged those populations and benefitted others," United Way of Central Carolinas President and CEO Laura Yates Clark said in a statement.

"All sponsors have the opportunity to share the Racial Equity 21-Day Challenge activity with their employees to encourage participation," the United Way press release explained.

The whistleblower who sent Rufo the materials also forwarded emails showing that the Charlotte market president encouraged employees to take the challenge.

According to Rufo, the challenge began by telling participants that the United States is a "racialized society" that "use[s] race to establish and justify systems of power, privilege, disenfranchisement, and oppression," which "give[s] privileges to white people resulting in disadvantages to people of color."

Should participants object to some of these characterizations, UWCC included responses to potential objections in its "discussion guide."

And, should participants ask about reverse discrimination, the guide claims that there is no such thing. "Reverse racism and discrimination are not possible given the history of oppression and power structures that have been core to the making of this country," the document claims.

The document also claims that people of color cannot be racist: "Racism is used to justify the position of the dominant group, White people in this case, and to uphold white supremacy and superiority. Everyone can be biased, and engage in bigoted and belittling behavior that is intolerant of other perspectives. But racism is by definition a form of oppression exercised by the dominant racial group (Whites)." 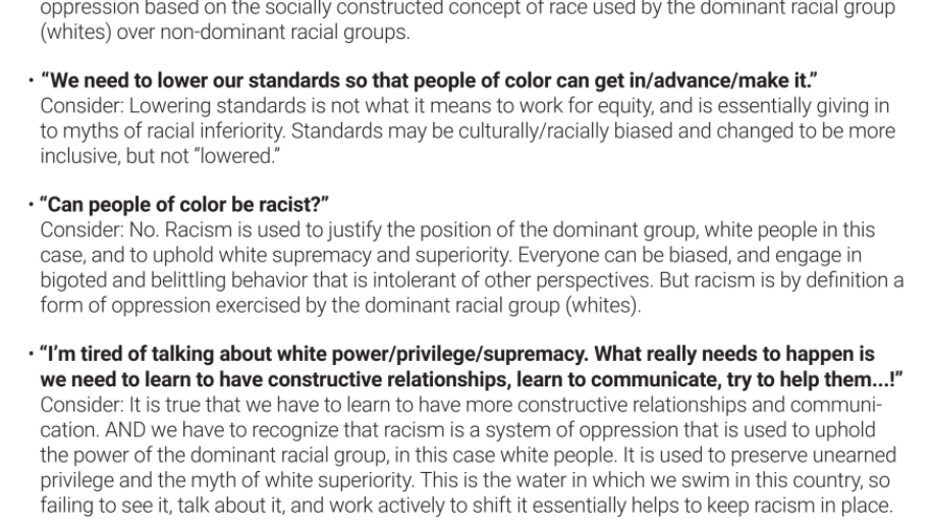 The 21-day challenge lectures participants on the concepts of intersectionality, systemic oppression, unconscious bias, White privilege, White fragility and more. The program presents racial gaps in wealth, health and real estate as evidence of systemic racism, citing sources such as The New York Times' "1619 Project," which scholars have condemned for twisting history.

The program claims that Black children disproportionately face classroom discipline, setting up a "school to prison pipeline," and that Black people suffer from "environmental racism" by getting exposed to more environmental pollutants.

“When you do CRT training, you are playing a large role in ripping America apart.”

The program recommends materials to "read about how to be a better ally in the workplace," and it includes a 38-page document entitled "Awake to Woke to Work: Building a Race Equity Culture."

That document includes a "Call to Action" encouraging White people to "cede power to people of color within and across teams, organizations, and systems." The document also urges participants to "decolonize your mind. Accept that White supremacy and institutional racism are real and practiced by all races." It urges readers to "dismantle" "White supremacy" and to call out "microaggressions." 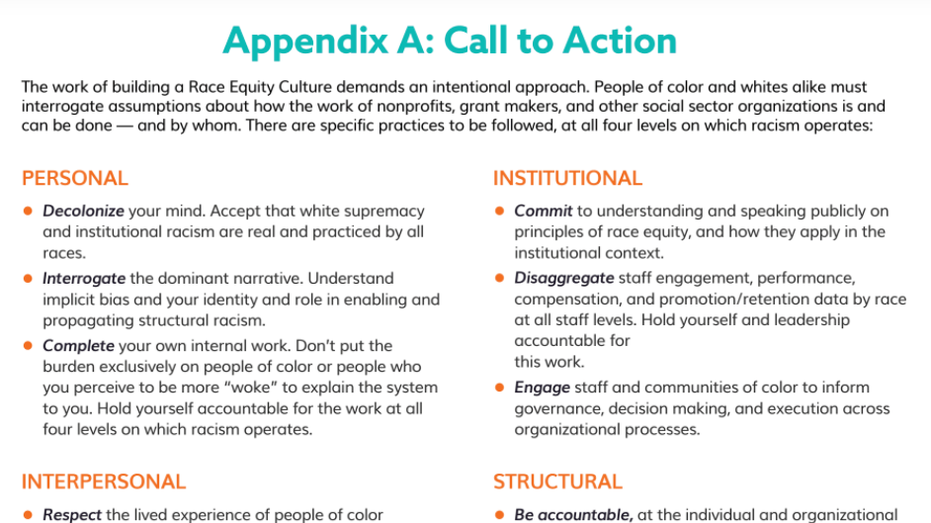 The final day of the challenge presents multiple action items. UWCC urges participants to have discussions about racism, read history books by self-proclaimed Marxist historian Howard Zinn, consult a guide from the Southern Poverty Law Center (which brands mainstream conservative organizations "hate groups" and lists them with the Ku Klux Klan, according to its critics), and donate to the United Way of Central Carolinas "to support our racial equity work."

"When you do CRT training, you are playing a large role in ripping America apart," Matt Schlapp, chairman of the American Conservative Union, which organizes CPAC, told FOX Business on Wednesday. Such trainings "make White straight Christian male employees apologize for being White, straight, male and Christian."

Bank of America, United Way of Central Carolinas, Lowe's, and Truist Financial did not respond to FOX Business' request for comment.