AstraZeneca's COVID-19 vaccine trial in the United States is expected to resume as early as this week after the US Food and Drug Administration completed its review of a serious illness, four sources told Reuters.

AstraZeneca's large, late-stage US trial has been on hold since September 6, after a participant in the company's British trial fell ill with what was suspected to be a rare spinal inflammatory disorder called transverse myelitis.

The sources, who were briefed on the matter but asked to remain anonymous, said they have been told the trial could resume later this week. It was unclear how the FDA would characterise the illness, they said.\ 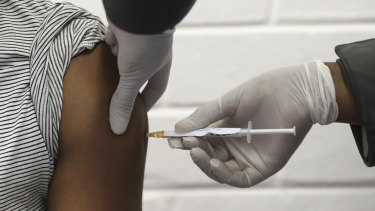 AstraZeneca had been seen as a frontrunner in the race for a vaccine until its trials were put on hold.Credit:AP

The agency is requiring researchers conducting the trial to add information about the incident to consent forms signed by study participants, according to one of the sources.

British regulatory officials previously reviewed the illness and determined there was “insufficient evidence to say for certain” that it was or was not related to the vaccine. It permitted the trial to resume in the UK, according to a draft of the updated consent form shared with Reuters.

“In this case, after considering the information, the independent reviewers and MHRA (Medicines and Healthcare products Regulatory Agency) recommended that vaccinations should continue,” the draft consent form stated. “Close monitoring of the affected individual and other participants will be continued.”

AstraZeneca, which is developing the vaccine with Oxford University researchers, had been seen as a frontrunner in the race to produce a vaccine for COVID-19 until its trials were put on hold to investigate the illness. Early data from large-scale trials in the United States of vaccines from Pfizer and Moderna are expected some time next month.

Johnson & Johnson last week paused its Phase III COVID-19 vaccine trial to investigate an unexplained illness in one of the study participants. At the time of the announcement, the company did not know whether the volunteer had been given its vaccine or a placebo.

A J&J spokesman on Tuesday said the study remains on pause as the company continues its review of medical information before deciding to restart the trial. J&J noted that its "study pause" was voluntary, in contrast to AstraZeneca's "regulatory hold," which is imposed by health authorities.

Vaccines are seen as essential to helping end the pandemic that has battered economies around the world and claimed more than 1 million lives – over 220,000 of them in the United States.

Responding to a request about the AstraZeneca trial, British regulators shared with Reuters a draft of a form letter to UK vaccine trial participants, dated October 14 and signed by the Oxford COVID-19 Vaccine Team. It says the US FDA had “completed their analysis” and said vaccination in the United States would resume shortly.

FDA "has come to the same conclusion as the other drug regulators including the MHRA," the letter states.

The Health Research Authority, which helps regulate UK medical research, did not say if the letter had been sent or respond to questions about it.

An AstraZeneca spokeswoman said the communication is not from the company and it "cannot verify the content," referring to the draft letter to study participants. "We also cannot comment on a pending FDA decision," she said.

In another of the documents directed at trial participants, the Oxford vaccine study team noted that there was not enough evidence to link the neurological problem seen in the UK trial to the vaccine.

Dr Paul Offit, director of the Vaccine Education Center at Children’s Hospital of Philadelphia who reviewed the document, said it can be difficult to link a rare side effect specifically to a vaccine to the exclusion of other potential causes.

Transverse myelitis, which the study volunteer is believed to have developed, typically occurs at a rate of 1-in-200,000 people, Offit said, so it would be unusual to see it in a trial of 9000 individuals.

Other viruses including those that cause West Nile and polio can trigger the condition, as can physical trauma.

The regulators have to weigh whether a rare side effect is vaccine-related and could occur again against the sickness and deaths linked with COVID-19, Offit said. "That's always the line that you walk."