AGL, the nation’s heaviest greenhouse gas emitter, has vowed to embark on a historic demerger of its business in response to the accelerating pressure of the switch to clean energy.

After months of deliberations, AGL’s board on Wednesday revealed details of its plan to split itself in two. The move includes forming a new company called Accel Energy that will separate its emissions-intensive fleet of power stations from its wider retailing business. 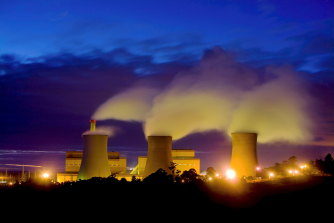 AGL Australia, to be headed by the energy giant’s chief customer officer Christine Corbett, will be a carbon-neutral retailer of power, gas and telecommunications serving an estimated 30 per cent of Australian customers, while also holding some energy generation assets and batteries.

Accel Energy, to be led by AGL’s interim chief executive Graeme Hunt, will own the bulk of AGL’s generation fleet including its heaviest-polluting coal- and gas-fired power stations.

Following the demerger, Accel would retain a 15 per cent to 20 per cent shareholding in AGL Australia, the company said. The demerger will happen via a capital reduction, with existing AGL shareholders receiving one share in each entity for each AGL share they own.

“The impact of recent challenging market conditions on our financial performance emphasises that AGL Energy is now at an inflection point as the transition of the energy sector accelerates,” AGL chairman Peter Botten said.

“After careful consideration, the board has confirmed that AGL Energy should move forward as two independently listed companies as the board believes this will be in the best interests of shareholders.”

Although analysts have generally supported the rationale behind the separation, many have cast doubt over AGL’s ability to offload Accel either through a demerger or divestment at an acceptable valuation because investors’ appetite for such emissions-intensive energy assets may be low.

AGL and fellow diversified energy giants Origin and EnergyAustralia have been under enormous pressure this year from an influx of wind and solar into the country’s main power grid driving down daytime power prices to levels where coal is increasingly unable to compete. This year, EnergyAustralia brought forward the closure of Victoria’s Yallourn facility to 2028, four years ahead of schedule.

There is little doubt across the industry that challenging years will become more commonplace as state governments in Victoria and NSW map out further plans to turbocharge renewable energy investment.

As Australia’s heaviest greenhouse-gas emitter, AGL has been increasingly under pressure from major shareholders including US investment giant BlackRock amid concerns about the risks posed by global warming and the gathering momentum around efforts to achieve the goals of the Paris climate agreement to limit temperature rises to 1.5 degrees.

The push to break up the nation’s oldest energy utility was first unveiled earlier this year by former chief executive Brett Redman, who said then now dubbed AGL Australia may lure climate-focused funds who are shunning coal, while other investors would be drawn to Accel as it could offer compelling returns.

Mr Redman’s sudden resignation led to analysts and investors querying whether the separation plan was running into trouble. Mr Redman said the timing of his exit would enable a new leadership team to “lead the business into its next chapter”.

The Market Recap newsletter is a wrap of the day’s trading. Get it each weekday afternoon