New York election officials are poised to remove Sen. Bernie Sanders (I-Vt.) from the state’s primary ballot on Wednesday, thanks to an obscure provision in the state budget law enacted by Gov. Andrew Cuomo (D) earlier this month.

The provision empowers the state’s election officials to remove from the ballot any candidate who has announced they have stopped running and is thus “no longer eligible” to win the nomination.

New York’s two Democratic election officials, Board of Elections Co-Chair Douglas Kellner and Commissioner Andrew Spano, are due to meet on Wednesday to discuss the matter.

Kellner, who was appointed by then-Gov. George Pataki (R) in 2005 at the behest of the Democratic-controlled state assembly, told HuffPost on Monday that his job is to interpret the statute. While the law only states that election officials “may” determine that a candidate is no longer eligible, Kellner interprets that language to mean they’re effectively required to remove Sanders.

“It’s not very controversial that Bernie Sanders has suspended his campaign,” Kellner said. “I anticipate that we will be removing him.” 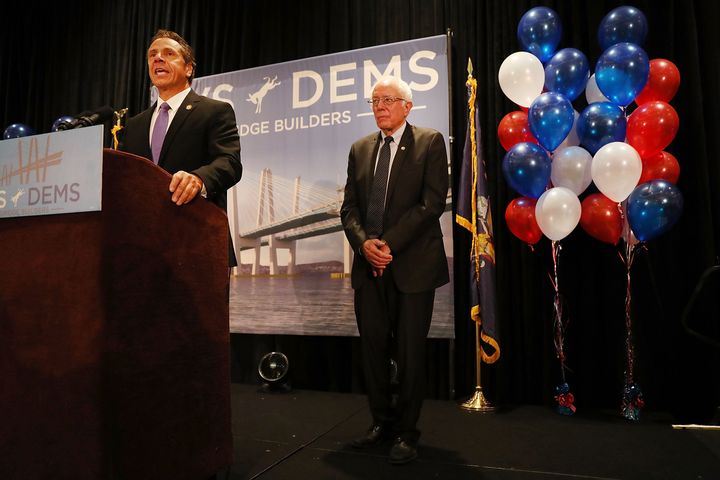 The decision to remove Sanders must be unanimous, however. If, for example, Spano disagrees with Kellner, Sanders stays on the ballot.

Spano, a former Westchester County Executive, told HuffPost on Tuesday that he is “still wrestling with it.”

On the one hand, Spano would prefer if the state’s county governments did not have to organize elections that could jeopardize public health due to the COVID-19 pandemic. Even if the state adopts mail-in ballots ― as Cuomo is expected to ― administering elections requires personnel and costs a significant amount of money, he noted. (More than a dozen New York counties would not be holding any elections in June if it were not for the presidential primary.)

At the same time, he said, “I recognize that Sanders and his people have done a lot of work over the years and they’d like a voice and this is one way they get a voice at the convention.”

If the board proceeds with the removal, it will effectively cancel New York’s June 23 presidential primaries, depriving Sanders’ supporters in the state of the chance to cast votes for him that would give them a greater say over the direction of the Democratic Party.

When Sanders withdrew from the primary earlier this month, he promised to remain on the ballot in states that had yet to cast votes to maximize his influence over the Democratic Party platform and nominating rules. (He endorsed former Vice President Joe Biden, the party’s presumptive nominee, a few days after dropping out.)

Sanders partisans are hoping, for example, to make permanent a rule change in effect in the 2020 cycle that bars the party officials known as “superdelegates” from backing a presidential candidate on the first convention ballot that differs from the candidate their state’s voters chose in a primary election or caucus.

Sanders’ base in New York would still have the opportunity to send delegates to the national convention, but it would be up to a state Democratic Party committee, which is controlled by Cuomo, to determine how many Sanders would get and who the delegates are.

Since New York’s convention delegation is one of the largest in the country, progressive activists worry that Cuomo may want to ensure that the delegation represents his interests in the national party. To that end, Cuomo’s allies in the state party could screen out more vocal Sanders supporters or make adherence to his agenda the price of participation.

“We think this is a power play on the part of the governor who wants to control the entire delegation,” said George Albro, a retired labor union official and a candidate to be a convention delegate who is leading grassroots efforts to keep Sanders on the ballot.

“If they cancel, this is going to be horrific,” added Albro, who is active in the New York Progressive Action Network, a pro-Sanders coalition. “Trump will use this against Biden.”

“Bernie’s delegates like me are running mutual aid efforts in the hardest hit areas like Jackson Heights and Jamaica Queens,” she wrote on Twitter. “Medicare for All needs to be a [conversation] at the DNC. Let Bernie Sanders stay on the ballot in NY.”

Albro and other progressive activists in New York also fear it could hurt progressive candidates for Congress and the state legislature who stand to benefit from being on the ballot with Sanders. (Responding to the growing pandemic in late March, Cuomo pushed back the date for the presidential primary to coincide with the congressional and legislative elections.)

In Congress, Jamaal Bowman, a middle school principal, is seeking to unseat Rep. Eliot Engel (D), a foreign policy hawk who has represented parts of the Bronx and Westchester County since 1989. And in the legislature, Queens housing counselor and radical activist Zohran Mamdani is vying to replace Assemblywoman Aravella Simotas (D), a mainstream liberal with ties to party leaders.

Rich Azzopardi, a spokesman for Cuomo, did not elaborate on why the election provision was included in the state budget but rejected the notion that it was politically motivated.

“We’re fighting a pandemic and have no time for conspiracy theories,” he said.

Spokespeople for New York state Senate Majority Leader Andrea Stewart-Cousins and New York state Assembly Speaker Carl Heastie, both of whom are Democrats, did not immediately respond to a request for comment.

Albro is nonetheless pressing ahead with his efforts. He organized an April 15 letter to Cuomo and the board of elections from all 184 New Yorkers due to represent Sanders at the national convention, calling for Sanders to stay on the ballot, and a similar letter from a host of major liberal organizations and grassroots leaders in the state.

“We are genuinely concerned about the suspension of democracy as proposed in a last-minute clause tucked into the budget,” the signers of the latter letter wrote.

Under pressure, New York Democratic Party Chairman Jay Jacobs agreed in correspondence with Sanders supporters to argue against removing him if Sanders wants to stay on the ballot.

Sanders has already articulated that he wants to stay on the ballot, but as of Tuesday, he had yet to weigh in on the specific case being debated in New York. The Sanders campaign did not respond to multiple requests for comment.

“If Bernie says he wants to stay on, they’re not going to take him off because that would be asking for trouble,” said state Senate Deputy Majority Leader Michael Gianaris, who endorsed Sanders in October.

Popular News:
Economy News:
This Is the State Where People Gave the Least Money to Charity
Samsung heir Jay Y. Lee sentenced to prison again in bribery case
After Market Hours: VOXX, GenMark, Future FinTech, Iridex Gain; Limoneira Slips
Top US banks' tax bill could surge $11B under Biden administration
Chairman of embattled satellite operator accused of insider trading
Recent Posts
This website uses cookies to improve your user experience and to provide you with advertisements that are relevant to your interests. By continuing to browse the site you are agreeing to our use of cookies.Ok