Home » Markets » US economy won't get back to 'normal' anytime in the near future: John Layfield

US economy won't get back to 'normal' anytime in the near future: John Layfield

Reopening the economy is up to legislators: Federal Reserve

The  U.S. economy will not return back to “normal” anytime soon, according to the Layfield Report CEO John Layfield.

Layfield said that because there are still so many unknown variables surrounding what the country will look like in the months following the coronavirus shutdown, there would likely not be a "V-shaped recovery."

"To me, a V-shaped recovery means we go back to normal," he said during an interview on "The Fox News Rundown" podcast with host Jessica Rosenthal. "We're going to have a new normal. We're going to have a recovery. That's the good part. But, I think the bad part is we're not going back to a normal type [of] economy anytime in the near future."

Layfield said because of the way American businesses are reopening in their states — at half capacity or sometimes less — the "best-case scenario" for the economy is markedly changed from even just six months ago.

"I mean, you tell a restaurant before this virus hit, 'we're going to let you open up in about three months. Right? [And,] close you down first. We'll let you open up at 50 percent. And your bar either can't be open or you're going to have to have all your customers six feet apart,'" he remarked. "That bar owner, [the] restaurant owner will tell you they can't stay in business at those numbers."

"That's [the] best-case scenario when we come back," Layfield added. "So, to me, I think… it's good that the economy is opening back up. But, I think the expectation… is a tad bit unrealistic that we're not going to open up and see the normal that we had back in December, January, when we had a pretty good economy."

Rosenthal interjected, noting that Americans might be confused looking at the thousands of protesters marching city streets against the death of George Floyd, but simultaneously being told they cannot reopen their livelihoods due to health restrictions.

"It sounds like in your mind you're saying, 'well, some businesses are going to, you know, keep these modifications even if other segments of society respond to react differently,'" she said to Layfield.

"I think they will," he replied.

Layfield noted that during a recent visit to Texas he observed that there was “very little” social distancing and people were not wearing face masks. 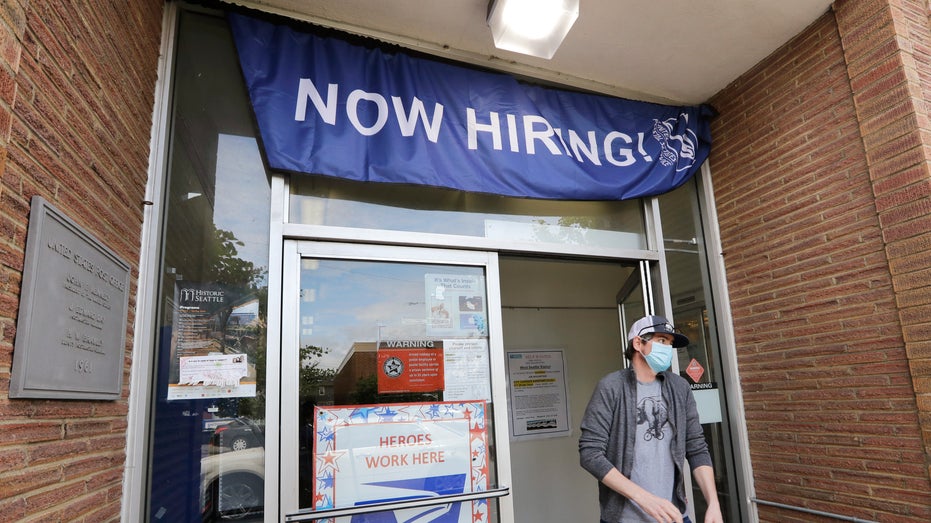 In this photo taken Thursday, June 4, 2020, a customer walks out of a U.S. Post Office branch and under a banner advertising a job opening, in Seattle. (AP Photo/Elaine Thompson)

This week, hospitalizations of patients infected with coronavirus hit a record high.

Texas had one of the fastest and most aggressive reopening timelines in the nation. But Layfield admitted that he was not sure where people would stand on this issue.

"I know in restaurants that I would go to down in Texas, where you have — were much further along than the Northeast, people are still not wanting to sit near other people. People are still wanting to social distance," he pointed out.

"So, I think we're gonna have certain… parts of the economy that are going to bounce back fairly quickly. Certain parts of [the] economy are going to lag," Layfield said.