Alleged Westpac fraudster Bill Papas says he’s been suffering from illness and anxiety since being hit with fraud allegations from Westpac and has had trouble responding to court orders because of his poor access to a computer and the internet in Greece.

In an affidavit filed with the Federal Court on Wednesday, Mr Papas apologised for missing multiple court deadlines that he said was “due to health issues principally around contracting SARS-COVID-19 … where I suffered symptoms of extreme exhaustion and fever”.

The documents detail a list of Mr Papas’ assets, which include three jetskis and a camper trailer each worth $15,000 and held at his multi-million dollar property in Wagstaffe on the NSW Central Coast, as well as $206,000 cash held in a NAB bank account. 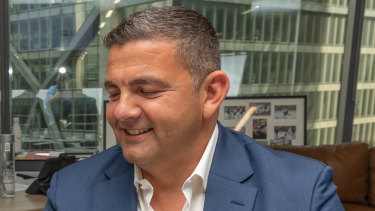 Mr Papas disclosed he held shares in 10 Australian companies, worth a total of around $100. Critically, Mr Papas said he sold his shares in Mazcon Investments in March this year – the entity through which he owns most of his valuable overseas assets, such as a property portfolio including four apartments and two office suites in the seaside town of Thessaloniki. Westpac’s lawyers cast doubt over this claim in court last Friday.

Mr Papas said he had been suffering “extreme anxiety and panic attacks” since he was served with court documents by Westpac in late June, that alleged he forged signatures and falsified documents to obtain hundreds of millions of dollars in bank loans through his company Forum Finance.

“I have been obtaining regular treatment from a health practitioner for the past three years in Sydney for anxiety and depression but as I am in Greece I have been unable to obtain that treatment,” Mr Papas said in the affidavit. “Until recently, I have been alone in Greece and in isolation, which has been extremely difficult for me and my mental and physical health.”

Mr Papas’ solicitor told the court in the first week of July that he had booked a Japan Airways flight to return to Australia to face the allegations, but ultimately never boarded this flight. Instead, Mr Papas’ girlfriend Louise Agostino joined him in Thessaloniki. “Since her arrival my health has improved,” Mr Papas said.

Mr Papas has repeatedly failed to provide the court with a list of his assets or defence to the allegations against him, which Federal Court Justice Michael Lee has described as “entirely unsatisfactory” in earlier hearings. Mr Papas said he has had “limited access” to technology and secure and reliable internet. “I have an older laptop with me that has at times been unable to open large documents.”

The European summer holiday period had also caused difficulties in accessing a public notary, he said, that further delayed filing the documents and exposed him to contempt of court charges. “I am three hours drive from the next large city that has a public notary,” Mr Papas said.

Meanwhile, Mr Papas’s business partner Vincenzo Tesoriero, who was filmed spectacularly crashing out of an amateur car race, confirmed in his affidavit he owned a series of high end luxury vehicles including a new BMW, Porsche Cayenne, and a 1957 Chevrolet Bel Air as well as a Ducati bike, Alfa Romeo and Mini Cooper.

Mr Tesoriero’s lawyers have previously said he resigned from most Forum entities earlier this year but his affidavit reveals he is owed $10 million from Forum Group, the employing entity of the group. Mr Tesoriero also confirmed he owns or was beneficiary of a trust that owns property that is together worth in excess of $60 million.

Mr Papas’ lawyers originally sought to have his affidavits banned from publication but later withdrew this application. The documents detail the first public statements made by Mr Papas since he went to ground following Westpac’s initial inquiries in mid-June about loans they suspected were fraudulent.