Australian banks allowed borrowers owing another $40 billion to pause their repayments in June as an emergency response to the coronavirus, taking the total value of deferred home loans and small business loans to $274 billion.

Official figures on Tuesday showed that even before Victoria's second lockdown, the stock of deferred loans held by banks was still accumulating, despite a modest rise in customers resuming their repayments. 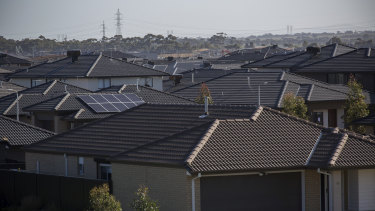 The value of home loans and small business loans on deferral hit $274 billion in June.Credit:Paul Jeffers

In an attempt to cushion the economy from COVID-19's impact, banks have allowed borrowers thrown into financial distress to pause their loan payments for up to six months, with the possibility to extend the deferral period to 10 months or until March next year.

However, Victoria's latest lockdown has worsened the outlook for banks, as it is expected to result in more job losses and businesses folding, pushing up bad debts.

In a sign of the pragmatic approach banks may take to customers in Victoria, ANZ Bank chief executive Shayne Elliott said the bank was open to being more flexible with customers if needed.

“We’re already going out to March, that’s what’s agreed with the regulator. I think it will be a watch and see. The good news here is both the banks, the regulators, everybody, has shown a willingness to flex with the reality,” Mr Elliott said in an interview with radio station 3AW in Melbourne.

Mr Elliott argued the coronavirus lockdowns, while having a "dreadful" financial impact on some, could lift productivity in the longer-term by accelerating changes such as the shift towards digital commerce.

The $274 billion in deferred loans – about 10 per cent of all bank loans in the country – are a huge source of financial uncertainty for lenders, which have been contacting hundreds of thousands of customers in recent months.

Banks have reported that up to 20 per cent of borrowers have voluntarily resumed their payments, but how the remaining 80 per cent will fare remains unknown.

Commonwealth Bank will next week provide a much-anticipated update on its loan book when it delivers its full-year results, with chief executive Matt Comyn expected to outline how the deferral arrangements could be used to support Victorian clients.

APRA said the most noticeable change in its data was an increase in the value of loans exiting from deferral, which rose from $2 billion in May to $18 billion in June. APRA said the majority of these loans returned to performing status.

However, APRA's figures also show the proportion of borrowers with deferred loans who were continuing to make full or partial repayment had fallen from 34 per cent in April to 20 per cent in May and June.

Evans and Partners analyst Matthew Wilson said the extent of loan deferrals supported his forecast for banks' bad debts to reach 1.5 per cent of gross loans, or $45 billion in cumulative losses. "However, the continued problems in Victoria create the risk that our current bad debt forecasts may be too optimistic," Mr Wilson said.

UBS analyst Jonathan Mott also highlighted the risk to banks from businesses failing, saying official figures showed 24 per cent of firms accessing government support programs expected to close once the support ended. "While the upcoming reporting season should be robust and bank valuations are not stretched, the second wave outbreak in Victoria (and potentially NSW and Queenslad) is very concerning," Mr Mott wrote in a note to clients.

Get our Morning & Evening Edition newsletters

The most important news, analysis and insights delivered to your inbox at the start and end of each day. Sign up to The Sydney Morning Herald’s newsletter here, to The Age’s newsletter here and Brisbane Times‘ here.