Schools are facing demands to step up their efforts to reach vulnerable pupils, following warnings that more children are being put at risk during the coronavirus lockdown.

With the number of vulnerable children turning up to schools far below official expectations, council officials are sounding the alarm that the number of those needing help from schools and social services is growing. The lockdown makes tracking new and worsening cases extremely hard.

There are concerns that schools’ success in keeping an eye on their vulnerable pupils is patchy. The Department for Education’s own figures suggest that just 5% of pupils identified as vulnerable were attending school in England. Ofsted, the education watchdog, is warning of a “worrying blindspot” resulting from schools and nurseries being unable to alert social services about potential neglect or abuse.

Anne Longfield, the Children’s Commissioner for England, who released a report on Saturday warning that hundreds of thousands of young people were off the radar as a result of the lockdown, said there was evidence that some schools could be doing more.

“We now know that only a very small percentage of the vulnerable children who are supposed to be in school are attending,” she said. “Many of these children are living in homes with a cocktail of risks – ranging from domestic violence to poor parental health, alcohol addiction and neglect. Keeping them in school is essential. 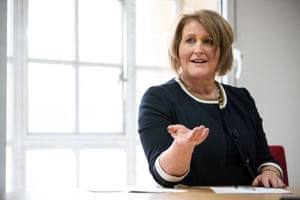 “I know some schools have been very active in reaching out to parents of vulnerable children and are doing all they can. I’ve heard teachers talking about their sleepless nights, worrying about what is going on behind closed doors in the homes of their most vulnerable kids. It’s also clear from the low attendance figures that some schools are not doing enough.”

Yvette Stanley, Ofsted’s national director for regulation and social care, said referrals to councils from schools and nurseries about potential abuse and neglect were much lower than usual. “This creates a worrying blind spot,” she said. “Other vulnerable children, like those with special educational needs and disabilities, may also have their services and support disrupted, putting families under additional pressure.

“With our routine inspections suspended, we’ve been working with councils to boost capacity where it’s most needed. Ofsted inspectors have been in, or are in, the process of being deployed in a number of councils. Helping to map vulnerable children is just one of the areas where we’re providing additional support.”

Charlotte Ramsden, from the Association of Directors of Children’s Services, said that the lockdown meant some children “who we would not usually consider as vulnerable will be presenting with new needs that we will have to meet, plus some who were already vulnerable will be facing additional challenges both now and in the future”.

She added: “Local authorities are reporting referrals to children’s social care as being lower than usual, which is an obvious worry for us, but we are absolutely clear that where children and families need help and support we are here for them.

“Social workers are prioritising face-to-face contact with children most at risk, many schools and early years settings are keeping in touch with those they actively support, and local safeguarding partnerships have been working and continue to work hard to raise awareness of hidden harm.”

Longfield’s report warned that there was a “real risk” of criminal gangs recruiting young people. Her findings are part of a paper focusing on deprivation among England’s most vulnerable families. “While the government’s decision to keep schools open for the most vulnerable children is welcome, sadly most of them are just not showing up,” she said.