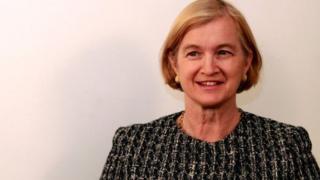 It is in children’s interests to return to school “as soon as possible”, says the head of England’s schools watchdog, Ofsted.

Amanda Spielman told a panel of MPs home and online learning were “imperfect substitutes” for school.

But she acknowledged adult health and infection risk needed to be considered.

Ms Spielman also said she expected to see a rise in the number of children needing some form of social care in the wake of the Covid-19 pandemic.

Last week, England’s Education Secretary, Gavin Williamson, said no date had been set for schools to reopen to pupils other than key workers’ children and those considered vulnerable – and certain thresholds in fighting coronavirus would have to be met.

But Ms Spielman told the Education Select Committee on Monday: “We have to accept that what can be done while schools are substantially closed is a very poor substitute for full normal education.

“Children are losing education and it’s not just the children who are disadvantaged or academically behind, it’s children without motivations.

“And it would be unrealistic for anyone, including me, to expect the vast majority of children to have made the same progress they would have made if they’d been in school, which is why I truly believe that it’s in children’s interests to be back in school as early as possible.”

But she urged schools to plan for how they could best return to normal education and “making sure children feel that normality”.

The Ofsted boss said she did not expect inspections to resume before the end of the summer term and schools would not be judged on how they had educated children during the current crisis.

There were “clear expectations” around safeguarding, she said, but “no expectations from government on learning”.

“We need to recognise that education has been substantially disrupted and will continue to be disrupted for some period after schools reopen, given what we know about likely expectations around social distancing and shielding,” Ms Spielman said.

But, she added: “We need to make sure that parents get the assurance they need that schools are looking after their children properly and educating them well.”

The social-care area of Ofsted’s work was “the very busiest at the moment”, Ms Spielman said.

“We have every reason to think this [pandemic] is putting more pressure on a lot of families – we’ve all seen the reports around increased domestic violence,” she said.

“We know some families will be under significant financial pressure – and financial strain does not help families’ situations.

“So, yes, it seems very likely that there will be more children needing social care.

“But at the moment referrals to local authorities are down, not up – many referrals come from schools.

“So my expectation, yes, it’s that there will be even more pressure on children’s homes [and] home placements [of children needing to be looked after by their local authority], as we come out of this.”

The chief inspector also took questions from MPs about unregistered schools, the sex and relationships curriculum and whether schools could study GCSE content over three years rather than the traditional two.

Mr Williamson is due to appear before the committee on Wednesday.