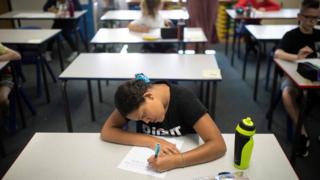 Some secondary pupils in England facing exams next year are heading into school from Monday for face-to-face time with their teachers.

Government guidelines only permit a quarter of the chosen year groups, 10 and 12, to be on site at a time.

The move comes as ministers are urged to work with teachers and councils on a national school recovery plan.

There are also cross-party demands for the poorest children to get internet access and devices at home.

A proposal signed by four former education secretaries, a former head of Ofsted and the Chairman of the Education Select Committee, Robert Halfon, as well as former Prime Minister, Tony Blair, is gaining support.

Labour’s Siobhain McDonagh will present a Bill on the issue in Parliament on Monday.

She said: “This policy isn’t a silver bullet and can’t replace months of missed education. But it would make an immediate, tangible difference to families right across our country.”

It is estimated that at least 700,000 disadvantaged children lack access to computers or internet, which are crucial for them to continue their education remotely.

Ministers have already set up a scheme to provide 330,000 free laptops to England’s poorest children, those on the pupil premium, but thus far only 100,000 devices have been distributed to local authorities and academy trusts.

A government spokesman said: “The government has already committed £100m to support children to learn at home and pupil premium funding at the highest ever rate continues to be paid to help schools support their disadvantaged pupils.”

Education Secretary Gavin Williamson is also due to set out the details of his summer catch-up plans in the coming days.

It comes after he scrapped the requirement for primary schools to bring all pupils back for a month before the summer break.

This U-turn came less than a fortnight after primaries in some areas began taking pupils from Reception, Year 1 and Year 6.

It prompted accusations the situation had been mishandled by the prime minister.

They are balancing the needs of their pupils and the availability of staff and space, which is limited due to safe distancing rules, he added.

A head teachers’ survey last week suggested nearly all schools would be inviting pupils in the chosen year groups back for support and reviews.

He also called for a detailed and coherent plan, properly rooted in independent advice, to be agreed as soon as possible.

Liberal Democrat education spokesman Layla Moran has written to the PM and education secretary, calling for a recruitment campaign.

She is also calling for local safe space registers to be drawn up to allow schools to use buildings and community spaces that are vacant nearby.

And local councils are urging ministers to work with them to find local solutions.

Councillor Judith Blake, chairman of the Local Government Association’s children and young people board, said councils were looking at innovative opportunities to use cultural spaces, like theatres, and natural settings, for much-needed teaching space.

“At the same time, it could provide cultural organisations and councils with ways of remaining financially sustainable and relevant to their local communities,” she said.

Local authorities needed guarantees they would have the funds to cover the cost of staffing and renting extra spaces, she added.

Geoff Barton, general secretary of secondary heads’ union, ASCL said: “The idea of opening up extra space so that more children could be brought back into school while remaining in small groups is a good one, which deserves further thought.

“Community centres, village halls and other facilities, could be utilised.”

But he said this was “only half the equation” as additional teachers would be needed to teach the extra classes.

Mr Whiteman, however, said the idea was unlikely to be workable.

“Based on government guidelines, we would need roughly double the number of classrooms available. We are talking about hundreds of thousands of spaces,” he said.