Headteachers across England last night expressed shock and despair at the human cost of the A-level grades being published today, with pressure mounting on the government to institute a fairer system or face a backlash.

As teachers braced to deliver the news to their students, Geoff Barton, general secretary of the Association of School and College Leaders, warned of “major turbulence” once grades were revealed.

No 10 remains nervous that England will see a replay of the widespread protests in Scotland last week, which led to the Scottish government scrapping grades allocated by a statistical model similar to that used in England, and replacing them with grades assessed by teachers.

Gavin Williamson, the education secretary, sought to placate pupils and their families last night by saying he was “incredibly sorry” for the disruption to their education during the coronavirus outbreak. “I apologise to every single child right across the country for the disruption that they’ve had to suffer,” Williamson said.

However, defending the approach the government has used to standardise results, he told the BBC: “We’ve got a system that is, I believe, the fairest that we can do; but let’s not forget that we’ve been in a global pandemic – we’ve been in a situation – none of us would have expected to be in.”

“It was obvious that this was going to be difficult but it’s been weeks or months in the coming. To have an 11th-hour decision that’s caused widespread chaos amongst teachers I have been speaking to, families and young people – it smacks of incompetence,” Starmer said.

School leaders on Wednesday received their first look at the A-levels being allocated to their pupils by Ofqual, the exam regulator for England, with one saying there was “anger, dismay, disbelief” among heads. 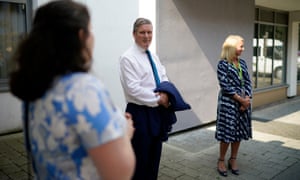 Mandeep Gill, principal and chief executive of Newham Sixth Form College, said 47% of the centre assessment grades his college had submitted had been downgraded – 301 out of 646 grades. Gill said other sixth-form colleges were seeing similar trends, including one where 55% of results had been downgraded: “We don’t understand why our [centre-assessed grades] have been downgraded by so much.”

He said he felt “shock, anger, dismay, disbelief” after seeing the results awarded by Ofqual’s algorithm. “We seem to have the worst results we’ve had in the last three years. I’m pretty cut up. I feel like I’ve let them down. I don’t know what else we could have done. We followed all the guidance. We did everything they said. We didn’t inflate grades,” Gill said.

Gill predicted that Williamson’s decision on Tuesday night to allow mock exam results as a grounds for appeal would cause further uncertainty. “I think it’s a total farce. How do you standardise that? The one thing I wish is that before all these knee-jerk announcements, they’d just spoken to us. We could have come up with a sensible plan,” he said.

Barton, whose union represents the majority of secondary school heads, said: “I think we are going to see major turbulence tomorrow. There’s some really big shocks out there. At the end of the day, headteachers do not give a stuff about algorithms. They are concerned about kids who should be getting an A and they find they are getting a C, and will not get their place at university.”

Barton stopped short of calling for the reinstatement of teacher-assessed grades, as in Scotland, but said the mood was changing among headteachers devastated by their results, who now saw the Scottish decision as less outlandish. “There are some big schools with good track records who are seeing some pretty dire results and they are feeling in despair about it. Heads are saying to me, I don’t think I’ve ever felt so powerless, saddened and frustrated,” he said.

Barton, a former secondary school head, recounted despairing emails from headteachers, with comments including: “Utterly, utterly bewildered. Our lowest set of results in the school’s history – 49% of all grades have been downgraded. How is this possible?”

The pressure on Williamson and the government in Westminster increased after Wales announced that it was putting a floor under every student’s A-level grades to avoid downgrades.

Kirsty Williams, the Welsh education minister, said: “I am giving a guarantee that a learner’s final A-level grade cannot be lower than their AS-grade. If a student receives a final grade tomorrow that is below that of their previous AS grade, then a revised grade will be issued automatically.”

Wales has retained a modular format for its A-level courses, including AS-level exams for the first year of sixth form. In England, AS-levels were decoupled from A-levels by Michael Gove when he was education secretary.

Ofqual broke its silence yesterday to defend its system of awarding grades using a school’s previous results and each pupil’s prior attainments, but warned that grades had been lowered to ensure a “level playing field”. “Adjustments were only made where necessary to bring consistency to the standards between schools and colleges,” it said in a statement.

The regulator confirmed that it was “working urgently to operationalise” the new appeal route using mock exam grades, but said said further details would have to wait until next week, leaving today’s A-level recipients in limbo.

The Department for Education has been reassuring MPs that England would not see a repeat of the embarrassing U-turn in Scotland. But one Tory MP said the DfE should have taken action earlier: “The risk is that kids are going to have their careers ruined, and they’re going to feel that the education system has let them down, and their life chances have been reduced to roulette”.

Another Conservative MP, David Simmonds, who sits on the education select committee, said: “The algorithm that’s being used for England’s exam grades is different from the Scottish one so we would expect it to produce different results. The testing that has been done on it suggests it wouldn’t throw up the kind of inconsistencies the Scottish system did, so I’m broadly supportive of it.

“But I have a very strong view that I do want there to be a proper appeals process for pupils that’s properly resourced. There’s a big issue for young people, particularly those in disadvantaged groups, where their engagement with the school might not be that good. What happens to them if the school doesn’t wish to take up their case?”