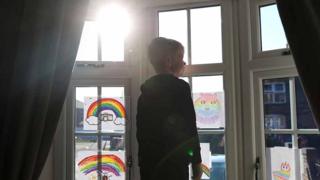 Around two million children in England face a range of vulnerabilities likely to worsen during the Covid-19 crisis, says the Children’s Commissioner.

A report for her office has mapped out, by local area, the vast challenges faced by the schools and councils supporting them in lockdown.

The risks range from mentally ill parents and substance abuse, to cramped housing and domestic abuse.

The government said vulnerable children were its first priority.

The Children’s Commissioner for England, Anne Longfield, said the lockdown had removed many of the usual ways of identifying children at risk, and the scale of the challenge in keeping them safe was enormous.

“We estimate that 2m children in England are in homes where there is either a problem with drug or alcohol abuse, domestic violence or serious mental health problems,” she said.

She praised the huge efforts many teachers and council social care staff are making to stay in touch with struggling children.

But she highlighted how only a small proportion of those at-risk children were attending the schools being kept open to support them: “Reaching out to these children and helping them during the lockdown – and beyond – must be a priority for national and local government.”

Earlier this week, Department for Education figures showed only a maximum of 5% of vulnerable children – which includes those with severe special educational needs – were attending school over the past few weeks.

Ms Longfield added that the figures lay bare the extent of vulnerability in each area, and the extraordinary pressures on some councils to try to protect these children.

Children’s Society head of policy and research, Sam Royston, said existing risks in these children’s lives may be worsened and they may be exposed to new dangers, including everything from being groomed online for sexual abuse to county lines exploitation.

Mr Royston argued that all vulnerable children should have a named professional to whom they could turn: “This should be someone who can check regularly that they are safe, whom they can ask for help and who can ensure they have opportunities to learn from home.”

The Department for Education announced it was investing £12m on 14 projects around England to tackle the increased risk that children and young people may be facing from staying at home.

Children’s minister Vicky Ford said the care and safety of vulnerable children was her priority.

“We are working hand-in-hand with all the professionals supporting these children, to prioritise their wellbeing during this unprecedented time,” she said.

The DfE has also already announced an extra £3.2bn for increased demand on local authorities during the crisis, but this comes after a systematic policy to reduce their funding by 40% over the past few years.

The Children’s Commissioner called for more effort to get children into school and an expansion of the numbers of those working with children, as well as a temporary increase in child benefit and better accommodation for homeless families.