The collapse of pre-election US stimulus talks threatens to inflict another wave of economic pain on Americans and curtail a recovery that's already slowed.

President Donald Trump's decision on Tuesday (US time) to walk away from talks with Democrats amid differences over the size of stimulus – even though hours later he appeared to reverse course – likely ended the chances of a relief package before the November 3 election. Aid might be delayed until January or February, after a new Congress is seated, meaning there could be a period of four or five months without additional support for jobless Americans and small businesses. 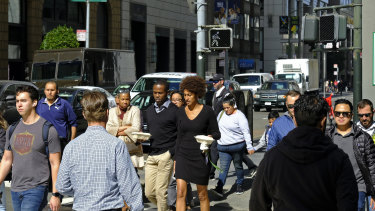 The US economy is showing signs of recovery but risks being battered again if a stimulus deal is not reached.Credit:AP

The decision puts the economic rebound at risk of stalling in the fourth quarter, with activity remaining well below its pre-pandemic level amid the coronavirus's persistent spread and the wait for a vaccine. It could leaves the Federal Reserve under pressure to provide more support.

"The news means that growth will likely slow to mid-single digits in the fourth quarter from roughly 30 per cent in the third, and it makes the economy more vulnerable if another shock were to hit," said Jay Bryson, chief economist at Wells Fargo.

Trump's tweet announcing an end to talks came hours after Fed Chair Jerome Powell warned of longer-lasting economic scars and a weak recovery without sufficient government aid and said too much stimulus wouldn't be a problem.

"This ups the ante that we fall into the tragic scenario that Chairman Powell laid out, that we get a longer lasting recession with deeper scars on the complexion of our economy, most notably in the labor force," said Diane Swonk, chief economist at Grant Thornton.

In tweets later Tuesday night, Trump indicated that he was willing to approve aid for airlines and small businesses, though a piecemeal approach has been largely rejected by Democrats. The news sent Wall Street moving higher, regaining its losses from Tuesday.

Economists said they still expect a stimulus bill within a few months, or speculated that Trump's move could be a negotiating tactic.

Analysts at Evercore ISI wrote in a note that the president's announcement could push the Fed into more action.

"We believe the collapse of the fiscal stimulus talks increases the likelihood that the Fed will strengthen its QE program by moving to an open ended economic outcome-based program with a longer duration skew in its purchases in December," they wrote.

Michael Gapen, chief US economist at Barclays, said the dip in stocks would probably have to be much larger to ensure that the Fed steps up its own stimulus.

It's serious damage and obviously a lot of pain that's going to extend through the end of the year and into the holiday season. As far as having a lasting consequence for the economy, that depends on what happens in January.

James Bullard, president of the Federal Reserve Bank of St. Louis, has been a vocal contrarian on the need for immediate stimulus. "There may be enough resources right now, at least for 2020," he said late last month at virtual community banking conference. "You could probably wait until next year and then you could assess the situation."

Also last week, American Airlines and United Airlines said they would start laying off 32,000 workers, blaming expiring government aid, the latest in a drumbeat of mass job cuts. Disney is slashing 28,000 workers while Allstate, the fourth-largest car insurer in the US, said it will cut about 3800 jobs, roughly 8 per cent of its workforce.

Corporate executives expressed dismay over the halt in talks. 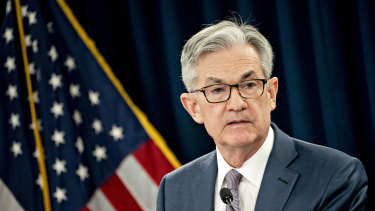 Fed Chair Jerome Powell warned of longer-lasting economic scars and a weak recovery without sufficient government aid and said too much stimulus wouldn’t be a problem.Credit:Bloomberg

"It's serious damage and obviously a lot of pain that's going to extend through the end of the year and into the holiday season," said Aneta Markowska, chief US financial economist at Jefferies. "As far as having a lasting consequence for the economy, that depends on what happens in January."

Even before Trump's announcement, the long deadlock over stimulus had already led many economists, including the teams at Goldman Sachs and JPMorgan Chase, to write off the prospects of new steps before the election – and lower their economic growth forecasts for the current quarter.

The focus has shifted to the spending measures that might get passed under whatever combination of White House and congressional control emerges from the November 3 vote.

Many Wall Street analysts say a Democratic sweep would deliver the biggest fiscal boost to the economy – because lawmakers will probably approve a big virus-relief bill right after taking office, while Democratic candidate Joe Biden is promising higher government spending than Trump.

In the shorter term, though, the economic effect is simple math: Less money flowing into the bank accounts of Americans and small businesses means less money to spend on goods and services and a diminished ability for employers to keep workers on staff.

"What we're looking at is a likelihood of a slowing in consumption and it puts the extent of the recovery at risk," said Joel Naroff, president and chief economist at Naroff Economics.