There’s an old joke about a traveller asking for directions on a country road. “If I was going there,” the local guide eventually concludes, “I wouldn’t start from here.” That’s the situation President Joe Biden faces in working out how to re-establish a dialogue on trade with China’s President Xi Jinping in their virtual summit scheduled for today.

If you were seeking a successful resolution to the broken trading relationship between the world’s two biggest economies, you’d be unlikely to start with the compromised, contradictory Phase One deal the Trump administration concluded with Beijing in January 2020. That’s what Washington’s trade negotiators have to work with, however, and they’re showing no inclination to consign it to history. 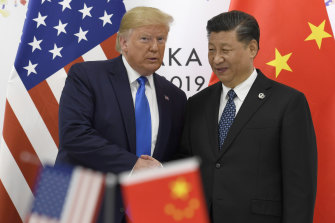 Only be leaving Trump in the past can US and China move forward.Credit:AP

“We must enforce” that agreement, US Trade Representative Katherine Tai said last month. Tariffs of 19.3 per cent on Chinese imports will remain in place, as will Beijing’s countervailing duties of 20.7 per cent on American products.

Holding tight to the Phase One deal no doubt plays well domestically in the US. Still, treating a figure hammered out under the glare of Donald Trump’s Twitter diplomacy as a foundation stone for further talks, rather than a stumbling block, sets up any negotiation to fail at the outset.

China’s purchases of US goods have been running at around 60 per cent of the levels promised under the Phase One deal, which targeted $US200 billion ($272 billion) over two years, according to an analysis last month by Chad Bown of the Peterson Institute for International Economics. Aircraft, oil and petroleum products are falling particularly far behind commitments.

It’s hard to blame that on Beijing. Few commentators ever thought that the promised sums were credible, even before a pandemic, shuttered production lines, semiconductor shortages and a collapse in the US shale sector. Together, these factors dealt a further blow to an agreement dependent on manufacturing, business travel and crude exports to make up its numbers.

Furthermore, the target sums would have been counterproductive even if they had been met. It’s hard to berate a country for falling short of market economy standards while also complaining that its government has failed to direct $US200 billion in trade flows in the way you’d demanded. It’s also much more difficult for the US to work with its allies in isolating Beijing — a key change Biden has made to the Trump trade agenda — while pursuing the sort of beggar-my-neighbour policies necessitated by Phase One. The easiest way for China to fulfill its promises around manufactured goods, for instance, would be for state-owned airlines to put in multibillion-dollar orders for Boeing rather than Airbus SE planes. That’s unlikely to play well in Brussels.

China would have good reason to think it can ignore US diplomacy altogether. Despite attempts to encourage US businesses to “onshore” production back home, of 338 companies responding to an American Chamber of Commerce in Shanghai survey over the summer, not a single one was planning to relocate production from China to the US Just 13 per cent were planning to move even part of their operations offshore.

Indeed, flows of foreign direct investment into China overtook those into the US in 2020 for the first time in recent history. Beijing clearly feels confident in its position: It’s even been pushing US businesses to lobby in its favour against anti-China bills in Congress, Reuters reported last week citing people familiar with the matter.

The fading effect of trade levies is hardly surprising. Tariffs provide declining leverage over time as economies adjust to the new circumstances, points out Stephen Olson, a former US trade negotiator and fellow with the Hinrich Foundation, an Asia-based trade think-tank.

“Both sides are likely looking for an elegant way to move past the Phase One agreement, but it can’t be ignored or simply set aside,” he said. “There has to be a resolution that’s palatable to both sides.”

The US economy is hardly struggling at the moment. Still, its key ailment — inflation running at its fastest pace in 30 years — is symptomatic of a world whose trading arteries have become clogged. Lowering both US and Chinese tariffs could be expected to ease the pace of price increases, Treasury Secretary Janet Yellen told Reuters in an interview earlier this month.

The US would do well to learn from its successful deal last month with the European Union to remove metal, motorbikes and bourbon from a Trump-era tariff spat, as well as planned de-escalation talks starting soon with the UK and Japan. As the last-minute deal between Beijing and Washington at the Glasgow climate conference last week demonstrated, the world’s biggest economies are still able to find common ground when they choose.

When the Phase One purchase commitments expire at the end of December, they should be consigned to history, and both sides should start working on reducing the tariffs that remain. Only then can the US and China get back to negotiating with each other in good faith.