Home » Economy » The Fed is really running out of firepower

The Fed is really running out of firepower

No central bank wants to admit that it's out of firepower. Unfortunately, the US Federal Reserve is very near that point. This means America's future prosperity depends more than ever on the government's spending plans – something the president and Congress must recognise.

There's always something more that the Fed can do. It can push down longer-term interest rates by buying more Treasury and mortgage-backed securities, or by committing to keep buying for a longer period of time. It can promise to keep short-term interest rates lower for longer, or until inflation and the unemployment rate reach its targets. It can put a specified ceiling on long-term interest rates (a manoeuvrer that economists call yield-curve control). It can even take interest rates negative (a move that Fed officials have so far rejected). 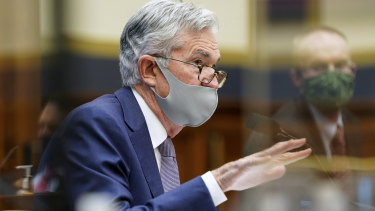 Fed chief Jerome Powell has a tough job on his hands.Credit:AP

But this misses a crucial point. Even if the Fed did more – much more – it would not provide much additional support to the economy. Interest rates are already about as low as they can go, and financial conditions are extremely accommodative. Stock prices are high, investors are demanding very little added yield to take on credit risk, and a weak dollar is supporting US exports. The rate on a 30-year mortgage stands at about 3 per cent. If the Fed managed to push that down by another 0.5 percentage point, what difference would it make? Hardly any. The housing market is already doing very well.

Moreover, the stimulus provided by lower interest rates inevitably wears off. Cutting interest rates boosts the economy by bringing future activity into the present: Easy money encourages people to buy houses and appliances now rather than later. But when the future arrives, that activity is missing. The only way to keep things going is to lower interest rates further – until, that is, they hit their lower bound, which in the US is zero.

When interest rates stay low for long enough, the policy can even become counterproductive. In the US, monetary stimulus has already pushed bond and stock prices to such high levels that future returns will necessarily be lower. Assuming stable valuations, expected equity returns over the next decade are probably no greater than 5 per cent or 6 per cent . The 0.7 per cent yield on the 10-year Treasury note doesn't even cover expected inflation. As a result, people will have to save more to reach their objectives, be they a secure retirement or sending their kids to college. That leaves less money to spend.

Even if people don't save now, low returns will eventually take a toll. State and local pension funds, for example, will fall even shorter of what's need to cover their obligations. To make up the difference, officials will either have to raise taxes or cut benefits for pensioners. Either action will leave people poorer, depressing consumer spending and economic growth.

What to do? No doubt, Fed officials should still commit to using all their tools to the fullest. But they should also make it abundantly clear that monetary policy can provide only limited additional support to the economy. It's up to legislators and the White House to give the economy what it needs -and right now, that means considerably greater fiscal stimulus.

Dudley is a senior research scholar at Princeton University's Centre for Economic Policy Studies. He served as president of the Federal Reserve Bank of New York from 2009 to 2018, and as vice chairman of the Federal Open Market Committee.