Home » Economy » States that voted for Biden in 2020 lost the most jobs during the pandemic, data show

States that voted for Biden in 2020 lost the most jobs during the pandemic, data show

Some workers choosing unemployment over jobs

The states that saw jobs increase from pre-pandemic levels were Idaho (0.5%), Kansas (0.3%) and South Dakota (1.3%). All of these states voted for Trump in the election. 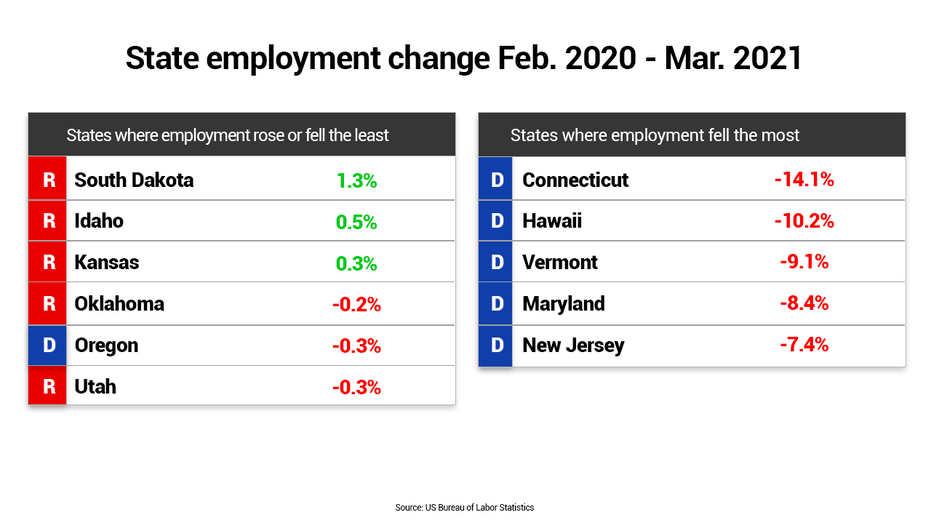 The Daily Mail first reported similar employment trends based on data ranging from February 2020 through December 2020.

Republicans have criticized Democratic governors over the lockdown policies throughout the pandemic, alleging that states like California and New York took dramatic measures to shut down their respective economies in an effort to prevent the spread of COVID-19.

On the other hand, Florida – under the leadership of Republican Gov. Ron DeSantis – never issued a statewide mask mandate and implemented restrictions in the state only for a short period in 2020.

However, not all states experienced COVID-19 outbreaks equally. Some of the populous states – like New York and California – experienced severe outbreaks, while other less populous areas did not see as many cases, which played a part in how their state leadership responded to the situation.

The U.S. economy, overall, is still 8.2 million jobs shy of pre-pandemic levels, but the Biden administration has estimated that if job growth continues at a steady pace, these losses could be recouped by the end of the year.