Home » Economy » How to Trade the Rise in Space Stocks

How to Trade the Rise in Space Stocks

Space and the possibilities of what lies beyond the realm of earth have captivated the minds of people for centuries. As investors, the limitless potential of business ideas that lie in today's modern space industry is a macro trend that is worthy of consideration. In this article, we will look at the chart patterns that have been forming across the industry and explain how traders could position themselves for a potential move higher over the weeks ahead.

With the rise in popularity of exchange-traded products, it seems that there is one or two to choose from for nearly every market segment. While this is true for the most part, the most popular when it comes to the niche of space-oriented stocks is the Procure Space ETF (UFO). Fundamentally, at least 80% of the fund's 32 holdings derive at least 50% of their revenue from one or more segments of the space industry.

Looking at the chart below, you can see that the price of the fund has faced resistance near its 200-day moving average since the recovery from the March lows. The recent break beyond the long-term moving averages and key trendlines suggests that the momentum is now in the favor of the bulls. Based on the pattern below, target prices will most likely be placed near the 52-week high of $29.03, while stop-loss orders will likely be placed below the psychological $20 mark. 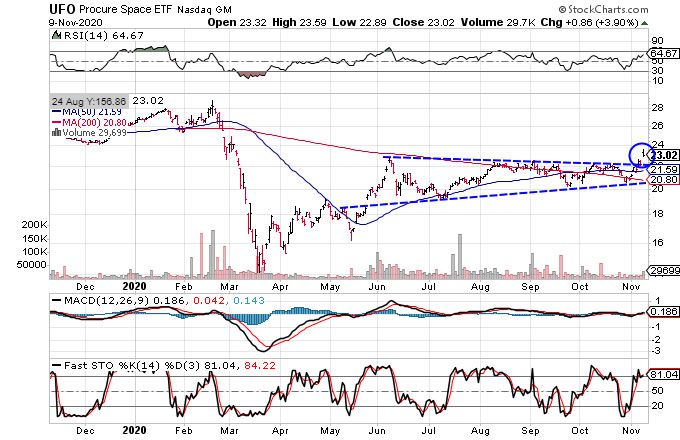 As one of the top holdings of the UFO ETF, ORBCOMM Inc. (ORBC) could be worthy of a closer look. For those who are unaware, the company offers network connectivity, devices, device management, and web reporting tools that are designed to track, monitor, control, and enhance security of certain assets such as trailers, trucks, rail cars, and sea containers.

As you can see from the chart pattern below, the price of the stock has been trading within a channel pattern since June and has recently broken above the resistance level on above-average volume. The breakout (as shown by the blue circle below) is a clear technical indication that the bulls are in control of the momentum and that prices could be poised to move higher over the weeks ahead. 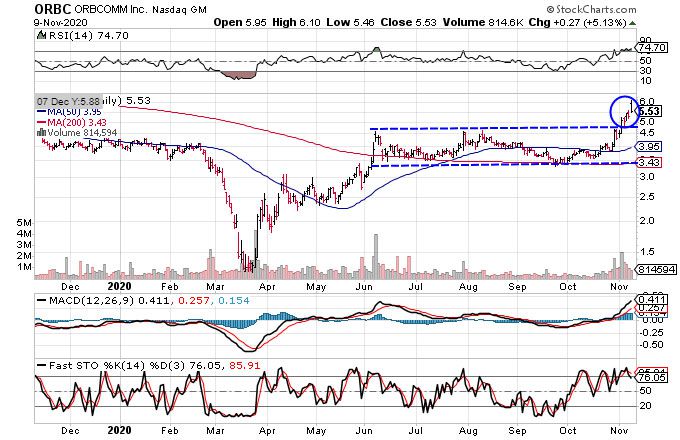 The new space race is still in its early stages, with the current amount of spending on satellite internet, space tourism, asteroid mining, and space-based manufacturing amounting to about $340 billion. However, Berrisford expects that amount to grow to $1 trillion by 2040 as both companies and governments direct more of their spending toward space-related investments.

Another top holding of the UFO ETF that could capture the attention of traders over the weeks ahead is Trimble Inc. (TRMB). The company a market leader in enabling professionals and field workers to improve or transform their work processes.

Looking at the chart, you can see that Trimble stock has been trading within a period of consolidation since moving above its 200-day moving average back in May. The break beyond the identified resistance level, as shown by the blue circle, is a clear indication that the bulls are in control of the momentum and that the stock price could be poised for a sharp move higher over the coming months. Based on this pattern, stop-loss orders will most likely be placed below $45 or $42.76, depending on risk tolerance and outlook. 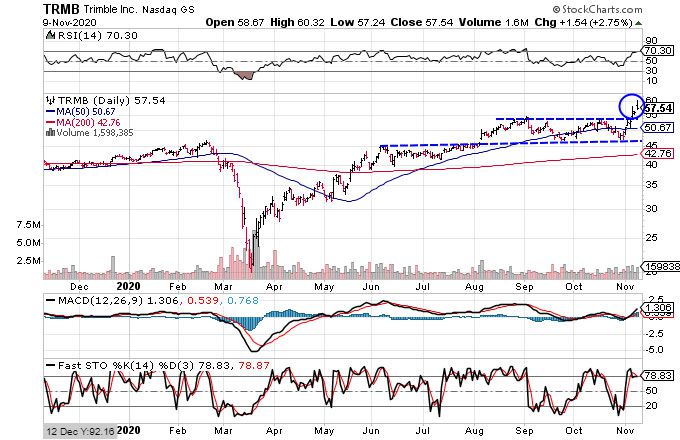 Space has always captured the minds of people as they look to the stars. However, for investors, the availability of funds such as UFO makes investing in this niche segment a possibility. As shown in the patterns above, prices across the sector appear to be well positioned to move higher over the final weeks of 2020 and likely for a good part of 2021.

At the time of writing, Casey Murphy did not own a position in any of the assets mentioned.