‘Damn lot of money’: How households plan to spend their pandemic savings

One of the silver linings of the COVID-19 pandemic for many Australians has been the opportunity to shore up their household finances.

This is not to minimise the health effects of a deadly virus, the heartache of separation from loved ones, or the economic disruption that saw widespread job losses and business closures.

Yet millions of Australians experienced no loss of income and two years of enforced savings because of lack of opportunities to spend their money. 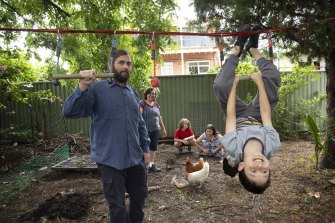 James Pearce says it’s ridiculous to say Australians should spend their savings and then chastise them for not saving.Credit:Lyndal Irons

Households have saved an average of 17.2 per cent of income since the pandemic started, according to the national accounts released in December, compared with an average of 6.1 per cent for the two years before that.

In dollar terms, households have put away about $260 billion in savings since the pandemic started, based on estimates from the Commonwealth Bank. It is, as Treasurer Josh Frydenberg said in late November, “a damn lot of money”.

Mr Frydenberg said he expected the money to be spent across the economy as restrictions eased and Australians went about their daily life, to “give our recovery momentum”.

Indeed, spending was strong at the time. Australian Bureau of Statistics data for November shows retail sales hit a record $33.4 billion, a 7.3 per cent rise from the previous month and 5.8 per cent higher than November 2020.

In December, the Commonwealth Bank’s Household Spending Intentions Index was at its highest level since before the pandemic, led by transport, travel, retail and household services.

But now with the highly contagious Omicron variant raging along the east coast, millions of Australians are again isolating. This includes those infected or close contacts but also many people who are healthy and well and trying to remain so.

Household spending is at the lowest point since the Delta lockdowns, with Sydney and Melbourne lagging the national average.

The Commonwealth Bank estimates consumer spending has already dropped by about 3 per cent over January as a result of the latest spike in COVID cases. A week ago, ANZ measured consumer confidence 2.2 per cent lower than mid-December, while the score for “time to buy a major household item” was 4.9 per cent lower.

The bigger question remains about what our spending habits will look like after the immediate crisis passes. Will Mr Frydenberg be belatedly proven right that Australians will fuel the recovery by spending their accumulated savings?

As the virus recedes and people can get out and about, consumers are likely to start spending again. We’ve seen that pattern repeatedly between lockdowns.

But even if people return to their pre-pandemic spending patterns, that could just slow down or halt the rate of new savings. It doesn’t mean they’ll also spend the money they’ve already socked away over the past two years.

The Australians interviewed by The Sun-Herald and The Sunday Age have other plans for that money.

For those who do intend to increase their spending, two themes are common. The first is international travel, which doesn’t wholly benefit the Australian economy. The second is home renovations, which benefits only a specific sector.

Meanwhile, the imperative to save for a home or retirement has not disappeared – in fact, the housing boom means it has only intensified.

However, Belinda Allen, a senior economist at the Commonwealth Bank, said younger Australians have been less able to save during the pandemic compared with Generation X and Baby Boomers.

By December, home-buying intentions had fallen compared with the previous year as affordability started to bite.

James Pearce and wife Karla Quintana are, like many Australians, saving for a home.

The couple, who are in their 40s and have three children, are renting in the Bankstown area. They moved to Mr Pearce’s hometown of Sydney from Ms Quintana’s native Mexico in 2019 and lived off their savings for about a year, while Mr Pearce retrained and looked for work. They own a house in Mexico, but it is not practical to travel there to sell the property during the pandemic. 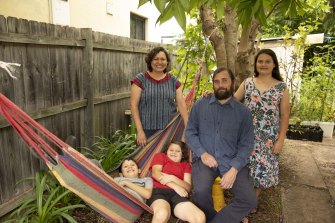 James Pearce and wife Karla Quintana have started new jobs and are saving for a home for themselves and their three children, Rigel, Alfonso and Nerida.Credit:Lyndal Irons

Mr Pearce eventually landed a job and then a new, better-paying one that could be done remotely during the long Delta lockdown in NSW.

Ms Quintana also found a job just before the same lockdown and qualified for JobSaver when she had to stop working.

The family saved money because lockdown meant they had to forgo family outings to the movies and a planned trip to the NSW snowfields, and could not travel to see relatives on the NSW mid-north coast.

“It’s been nice to have that buffer again,” Mr Pearce said. “We’re pretty much going to keep saving because we want to extend that buffer and, at some point, we’re looking at buying a home rather than relying on the rental market. It will take quite a while before we can afford the deposit because of the price of property at the moment.”

Mr Pearce said the Treasurer’s call for Australians to spend their savings was “ridiculous and disingenuous”.

“You get both arguments, right? When people said ‘we can’t afford a deposit for a house’, [other] people say ‘oh well you can just not go out, not eat out, you’ve got to save your money for the deposit’,” Mr Pearce said.

“And then they turn around and said , ‘hold on, everyone’s got too much savings, you need to go out and spend it’. We can’t do both.”

Anushka Bandara, from south-eastern Melbourne, has saved at least $10,000 a year by not travelling overseas. 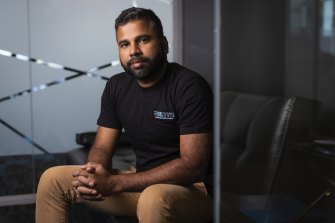 Anushka Bandara has saved about $10,000 a year by not travelling overseas for work or pleasure.Credit:Paul Jeffers

Mr Bandara, who is co-founder and chief executive of app developer Elegant Media, would normally spend a lot of his time visiting his international and interstate offices, staff and clients, as well as travelling for pleasure and personal reasons.

The repeated lockdowns in 2020 and 2021 also put a dent in his spending on entertainment and social activities, such as dining out, that was not offset by extra spending on takeaway meals and subscription streaming platforms.

“During the lockdown, the business wasn’t affected so nothing changed income-wise, but the expenditure was cut down because there was no way to spend your money,” he said.

Mr Bandara, who is married with a young daughter, said he will use some of the savings for home improvement projects and a trip to visit relatives in Sri Lanka.

He also plans to reinvest a lot of his savings back into the business to capture growth in artificial reality, the metaverse and gaming.

Mr Bandara said people are unlikely to spend money outside the home or travel while the virus is a threat because they don’t want to risk illness or having to isolate.

Christina Gretton, from Ryde in Sydney, was “bunkered down” for most of the pandemic, only spending money on groceries and other essentials.

Since her income was unaffected, she wound up with thousands of dollars in extra savings.

Ms Gretton said she received quotes for renovations on the house, but delayed her plans because the builders were busy and construction materials scarce.

Given the low returns from bank interest, she decided to invest the money in shares for the time being.

When she was a young woman, Ms Gretton saved a deposit for her first unit by investing in shares after her grandmother encouraged her to learn about it. 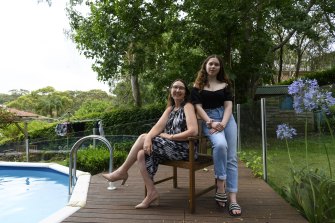 Christina Gretton with one of her daughters Maddie Miller. She has opened share funds for both her teenage daughters.Credit:Rhett Wyman

She decided to try to pass on this knowledge by also investing in shares for her teenage daughters, aged 14 and 17.

Ms Gretton is using an app and has the children’s accounts as sub-accounts to save on fees, but intends for them to take it over when they turn 18.

“I’ve showed them the app because it shows the fund movements – it’s very simple, it’s very graphic and you can see how your fund is tracking,” Ms Gretton said.

“I show them that because I want to build their understanding of how the stock market works, so that when they do start earning they’re going to see the value in investing their money rather than just spending.”

Kay White and her husband from the inner west of Sydney usually make an annual trip to Ireland to see family, but they have not been since Christmas 2019.

Even though they stay with family and friends, the cost of flexible flights, travelling around Ireland, spending money and insurance could easily add up to $10,000 for the two of them.

For the first 18 months, the couple went nowhere and spent barely anything. However, in the past six months, they have travelled within Australia instead.

In June, before the long Delta lockdown, White took a trip to the Northern Territory to hike the Larapinta Trail, and her husband came and joined her afterwards to visit Alice Springs and Kings Canyon. 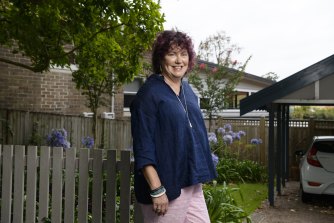 Kay White and her husband usually go to Ireland every year but during the pandemic they have taken holidays in Australia instead.Credit:Rhett Wyman

Then in November, the couple stayed at the exclusive Gaia Retreat & Spa in Byron Bay, which cost about $8000 for five days. Ms White said they could not find any accommodation in Byron for less than $400 or $500 a night, with no breakfast, and did not want to self-cater so they decided to splurge.

“It was just really nice. We wanted to stay in a place with really nice food, and we enjoyed doing yoga every morning and while the weather wasn’t great, it was lovely,” she said.

“It’s not a holiday we would normally take, but it was comparable in cost with a trip to Ireland.”

The couple is also planning to build an outdoor entertaining space at home.

Stay across the most crucial developments related to the pandemic with the Coronavirus Update. Sign up to receive the weekly newsletter.