Home » Economy » Black Friday in a pandemic: The strong get stronger and everyone else is hanging on

Black Friday in a pandemic: The strong get stronger and everyone else is hanging on

Retailers have experienced a stark split in fortunes during the pandemic. The mass shutdowns last spring fuelled big-name bankruptcies and thousands of store closings. And the strong, like Amazon and Walmart, have only gotten stronger and more profitable, driven by their online businesses and ability to supply everything people need while stuck at home, from food to electronics.

Now retailers are entering their most important time of the year: the holiday shopping season, which has long revolved around Black Friday. 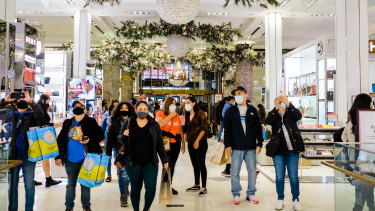 At Macy’s flagship store in Manhattan, Black Friday was a different scene this year.Credit:Bloomberg

The day has been known for doorbuster deals and early-morning shopping trips. This year, many of those deals began as early as October and were offered online, reflecting the pandemic's challenges for physical stores and a shift in how consumers choose to shop.

About 59 per cent of shoppers had started their holiday shopping by early November, according to the National Retail Federation. And more of that shopping is occurring online. E-commerce sales are expected to grow by as much as 30 per cent over last year's holiday season, the trade group said.

Overall, the industry group, which is usually bullish, said holiday sales could rise 3.6 per cent to 5.2 per cent, compared with last year's 4 per cent increase.

One early signal of the growth of digital sales: Adobe Analytics, which scans 80 per cent of online transactions across the top 100 US web retailers, said consumers spent about $US5.1 billion online Thanksgiving Day, up from $US4.2 billion last year.

Whatever the increase in spending, it is remarkable on many levels that Americans, on the whole, are expected to spend more this holiday season than last.

And yet for all the upending of shopping habits this year, Black Friday crowds remained a big part of the equation. Best Buy and Walmart, for example, offered many of their deals in stores, starting at 5am.

At Macy's flagship store in Manhattan, Black Friday was a different scene this year. 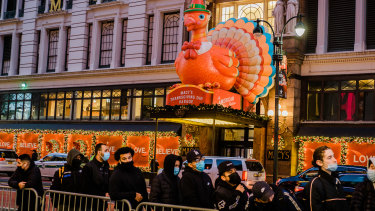 Numbers were down in New York, but it still promises to be one of the biggest shopping days of the year.Credit:Bloomberg

Sure, the massive Herald Square building was lit with Christmas lights and motion screens, and the windows were decorated with vibrantly coloured toys, lights and images of New York City landmarks. But red stickers on the ground depicting two reindeer urged people to stay safely apart while viewing the decorations. And city workers had less to clean up after the Thanksgiving parade, since the pandemic had limited the event to the store's immediate vicinity, with few spectators.

Even with the year's dislocations, Moses Slone, a 32-year-old Lower East Side resident, held to a Black Friday routine of shopping with his mother, Michelle Slone, 50, who was visiting from Florida. She was up at 4 am, an hour before her son, and Macy's was their first stop, just before 7.

"We didn't buy anything, as there just wasn't as many deals as there were last year," Moses Slone said as they left the store. "This year was more about tradition than actual shopping. It's a way to get into the spirit of the holidays."

The CDC warned of shopping risks

The Centres for Disease Control and Prevention's list of higher-risk activities for spreading COVID-19 includes "going shopping in crowded stores just before, on, or after Thanksgiving."

The CDC included the note about shopping in its guidance for holiday celebrations this fall. "Shopping online rather than in person on the day after Thanksgiving or the next Monday" was listed among lower-risk activities.

The encouragement to shop online and avoid crowded stores fits with retailers' own plans in this unusual year as they confront fearful customers and capacity restrictions. Retailers have worked to spread out demand and manage crowds. Most major chains were closed on Thanksgiving this year after years of being open on the holiday.

Curbside pickup became a bigger part of the ritual

At the Best Buy outside Arden Fair Mall, a Sacramento shopping hub, there were no lines wrapping around the building on a chilly Black Friday morning, but plenty of customers emerged toting bulky televisions and other electronics.

A handful of shoppers planned ahead, ordering online and waiting for curbside pickup. They parked in designated spots and checked in with Best Buy on their phones. Minutes later, an employee would exit the store to verify the customer's identification and hand over purchases.

Like many other retailers on this Black Friday, Best Buy said it was offering curbside pickup as it limited the number of shoppers inside stores to reduce the risk of spreading the coronavirus. And for the new Xbox and PlayStation video game consoles — which have generated significant excitement in the gaming community and long lines at GameStop stores — Best Buy was accepting only online orders. 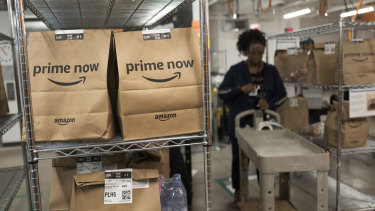 Amazon has been one of the big winners of the pandemic. Credit:AP

The social distancing rules sounded fine to Noah Hippler, 19, who was clearing space in his car's trunk outside Best Buy to make room for the Samsung TV he was purchasing for his grandparents as a gift.

"It's been a hard year, you know?" he said as he adjusted his purple Sacramento Kings mask.

"I just wanted to keep myself safe," he said. "I don't want to be around other people."

New shopping habits are likely to outlast the pandemic

Early last month, two Macy's stores, in Delaware and Colorado, went "dark," meaning employees are primarily using the spaces as fulfillment centres where they process online orders and returns rather than a place for customers to browse and shop.

The forces propelling online shopping were set in motion long before the pandemic. But charting the decline of many brick-and-mortar stores and the simultaneous growth of e-commerce in the past seven months is like watching the industry's evolution on fast forward.

Jeff Gennette, Macy's chief executive, said the dark stores were part of an experiment as the company responds to customers buying more online and demanding ever-faster shipping for free. But the conversion of a department store into a fulfillment centre, even temporarily, reflects how retailers are succumbing to the dominance of e-commerce and scrambling to salvage increasingly irrelevant physical shopping space.

Retail executives said that staggering growth was not a fluke of the pandemic lockdowns but the result of a permanent shift in how people shop.

A concise wrap of the day on the markets, breaking business news and expert opinion delivered to your inbox each afternoon. Sign up for the Herald‘s here and The Age‘s here.