Workers without a university degree will be hardest hit by the Covid-19 crisis, raising fears of increasing inequality across Europe, where up to 59m jobs are at risk.

Nearly 80% of workers facing job insecurity – including cuts to hours or pay, temporary furloughs, or permanent layoffs – do not have a university degree, according to new research by the consultancy firm McKinsey.

People at risk include retail staff, cooks and actors, as well as construction workers and office support staff, who are twice as likely to see their livelihoods under threat during the outbreak because they work in close proximity to others and have significant exposure to the public.

Low-insecurity occupations include workers who either do not need to work in close proximity to others, such as accountants, architects and journalists, or whose work provide essential health services, such as healthcare staff or other essential services such as police, food production, education, public transport, or utilities.

The research raises concerns that the coronavirus outbreak could widen the gap between rich and poor across the EU and UK. “Short-term job risk is highly correlated with level of education, potentially exacerbating existing social inequalities,” McKinsey said.

The warning came as Britain’s coronavirus job retention scheme starts accepting applications for government support from firms that have furloughed their staff.

While many countries, including the UK, have rolled out massive stimulus programmes to help soften the economic blow of national lockdowns, McKinsey warned that Europe could still face social unrest as a result of rising unemployment. 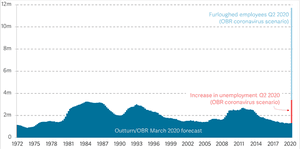 “Societies’ inequalities are exacerbated by higher unemployment rates, as social-welfare systems cannot fully alleviate the negative effects of a loss of employment. Increases in crime rates and social unrest are also potential consequences of an increase in unemployment,” McKinsey said.

“Moreover, unemployed people are twice as likely to experience mental illness (and even more so for blue-collar workers), and they receive inpatient treatment more often,” the report added.

In the UK alone, up to 11 million people could end up furloughed or unemployed over the next three months, according to separate research by the Resolution Foundation, which also showed that low-paid workers would be hardest hit.

But the foundation said that the UK’s coronavirus job retention scheme – in which the government will pay for 80% of a worker’s pay, up to £2,500 per month – has so far shielded the UK from the worst-case economic shock. The foundation’s economist, Daniel Tomlinson, said the scheme “is what stands between Britain experiencing high unemployment over the coming months and catastrophic Great Depression-era levels of long-term joblessness.

“It is proving particularly essential in big, low-paying sectors like hospitality and retail, where around half the workforce are no longer working,” he added.

Around 46% of workers in the UK hospitality and retail sectors are expected to be furloughed, compared with just 4% of employees in the highest-paid sector, insurance and finance.

The British Chambers of Commerce estimates that two-thirds of firms have furloughed some of their staff. “The opening of the job retention scheme is an important milestone for businesses, who can now begin to access the cash they need to pay their staff and protect livelihoods,” the BCC director general, Adam Marshall, said.

The McKinsey research also found that young employees between the ages of 15 and 24 are also twice as likely to face job instability during the outbreak compared with their older counterparts. However, Sebastian Stern, a senior partner at McKinsey, said the long-term impact on young workers would hinge on how quickly governments start to exit lockdown measures.

“If we get out of the lockdown measures as soon as you can justify it, and we invest into the right kind of sectors, I would not say this is a lost generation already,” Stern said. “[But] we need to get the response right.”

It is still early to tell how many at-risk employees could ultimately lose their jobs, but Stern said it was not all doom and gloom for European firms and their workers. He said the outbreak will force some industries to manufacture new products or introduce new working practices that might otherwise have taken years to adopt.

One example is the German automotive sector, which was already shifting towards electric vehicle production. “Stimulus packages and the investments that come with it could foster and accelerate structural change,” Stern said.

“If governments decide that they want to invest into that sector by pushing electric vehicles then you see that will accelerate structural change in that industry.”