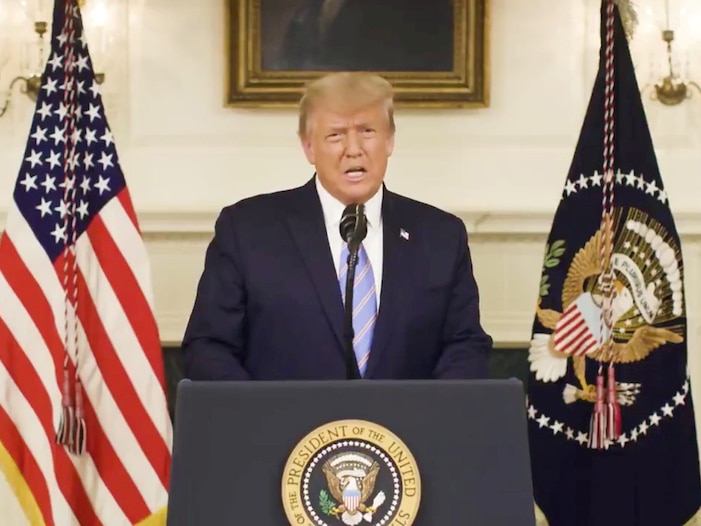 US stocks were set to continue their remarkable rally at the opening bell on Friday, according to futures prices, after President Donald Trump conceded the election and as investors positioned for more fiscal stimulus from President-elect Joe Biden and the Democrats.

Traders continued to sell government bonds and move into stocks, pushing Asian shares higher overnight, but gold lower. Chinese shares snapped a six-day winning streak amid fresh tensions with the US, however.

Investors have piled into stocks in recent days after the Democrats took control of the Senate via two runoff victories in Georgia and as the vaccine rollout expands.

Even unprecedented scenes of pro-Trump rioters storming the Capitol building could not deter the rally, which has sent the S&P 500, Dow Jones, Nasdaq and Russell 2000 indices to all-time highs.

“So much for a slow start to the new year,” said Han Tan, market analyst at trading platform FXTM.

“From a pair of tense Senate runoffs, to a mob breaching Capitol Hill and even a shock oil supply cut from Saudi Arabia, global investors have had plenty to take in this week. Yet, the buying momentum in stocks has continued unabated.”

The major factor driving stocks upwards has been the Democrat “clean sweep” of the White House, Senate and House of Representatives. But Trump’s concession and promise of a “smooth, orderly and seamless transition of power” in a video have also calmed nerves.

Biden and his colleagues in Congress are set to launch a bigger round of fiscal stimulus with a focus on infrastructure and low-carbon initiatives. The President-elect pledged during the Georgia runoff campaigns to get $2,000 stimulus checks to Americans “out the door immediately”.

The rally in US stocks has been broad-based. Climate-friendly companies have profited: Tesla, for example, soared 7.94% yesterday, making Elon Musk the world’s richest person. But industrials and other value stocks are up too.

The promise of more stimulus in the world’s biggest economy has also lifted markets around the world. Asian shares have rallied sharply, with Japan’s Nikkei 225 jumping a further 2.36% overnight and Hong Kong’s Hang Seng climbing 1.2%.

However, China’s CSI 300 slipped 0.33% after a six-day rally. Trump administration officials have attempted a new crackdown on Chinese companies in their final days in office, raising tensions.

Shares opened higher in Europe on Thursday, with the continent-wide Stoxx 600 climbing 0.65%. The FTSE 100 rose 0.13%, putting it on track for a one-week rise of around 7%, its biggest one-week rally in two months.

US Treasury yields continued to rise as investors sold the safe-haven assets in favour of equities.

The yield on the 10-year Treasury note, which moves inversely to price, climbed 1.2 basis points to 1.083% as investors anticipated higher issuance from the government as well as growth and inflation. The 30-year yield rose 0.8 basis points to 1.853%.

Read more: Democrats’ victories in Georgia will pave the way for federal cannabis reform and spur major investors to jump into the booming industry

Rising yields hit gold as investors turned towards assets with a yield. The spot gold price was down 1.2% to around $1,889 an ounce on Thursday morning. Gold has lost almost $100 since hitting two-month highs on January 6.

Jeffrey Halley, senior market analyst at currency firm Oanda, said: “Gold is very sensitive to the US 10-year yield. If the 10-year yield keeps rising, gold could seriously threaten support. That could lead to a much deeper capitulation correction.”

But the startling rally in Bitcoin showed no signs of slowing, with the cryptocurrency powering past the $40,000 mark on Thursday. It then slipped back slightly and was last at around $38,487.

Naeem Aslam, chief market analyst at Avatrade, said: “The cryptocurrency achieved a major milestone and crossed the $40,000 level, which has made the $50,000 price as real as it can be.

“After recording another all-time high, we see profit-taking among many investors as they know that bitcoin is a kind of beast that can easily move 10% in a day in any direction.”