‘Thoughts Of A Colored Man’ Broadway Review: Seven Men And A Neighborhood Brought To Exhilarating Life

This Broadway season, as stop and start as it has been, has been blessed with some truly stellar moments – and spotted with blessedly fewer disappointments. The vibrant Pass Over was an ideal curtain raiser for an industry waking up. Lackawanna Blues felt like a tonic, and Is This A Room is as wrenching a work of art as any with roots in the Trump era to date.

And as worthy of applause as those productions were and are, all feel a bit like preamble to Keenan Scott II’s remarkable Thoughts of a Colored Man opens, the first fully realized reflection of the shutdown era. A play of immense compassion and keen insight, with a vise-grip on the dreams and disappointments of its characters, Thoughts of a Colored Man is a paean to life as both survival and celebration, a tribute and exploration of the Black men who find beauty, dignity, frustration and inspiration where they can.

Mixing spoken word, slam poetry, laugh-out-loud comedy, drama and razor-sharp dialogue, Scott’s words are met with Steve H. Broadnax III’s directorial flourishes that are so lovely they elicit gasps. Both playwright and director are Broadway newcomers, and their Thoughts of a Colored Man is a marvel from start to finish.

Set in a Brooklyn neighborhood just beginning to feel the shifts of gentrification, the play tells the stories of seven Black men who share both space and heritage. Each character goes nameless until the play’s end – with one exception that won’t be spoiled here – though what’s revealed aren’t really names so much as character themes. One calls himself Love, another Happiness, another Wisdom, and so on. 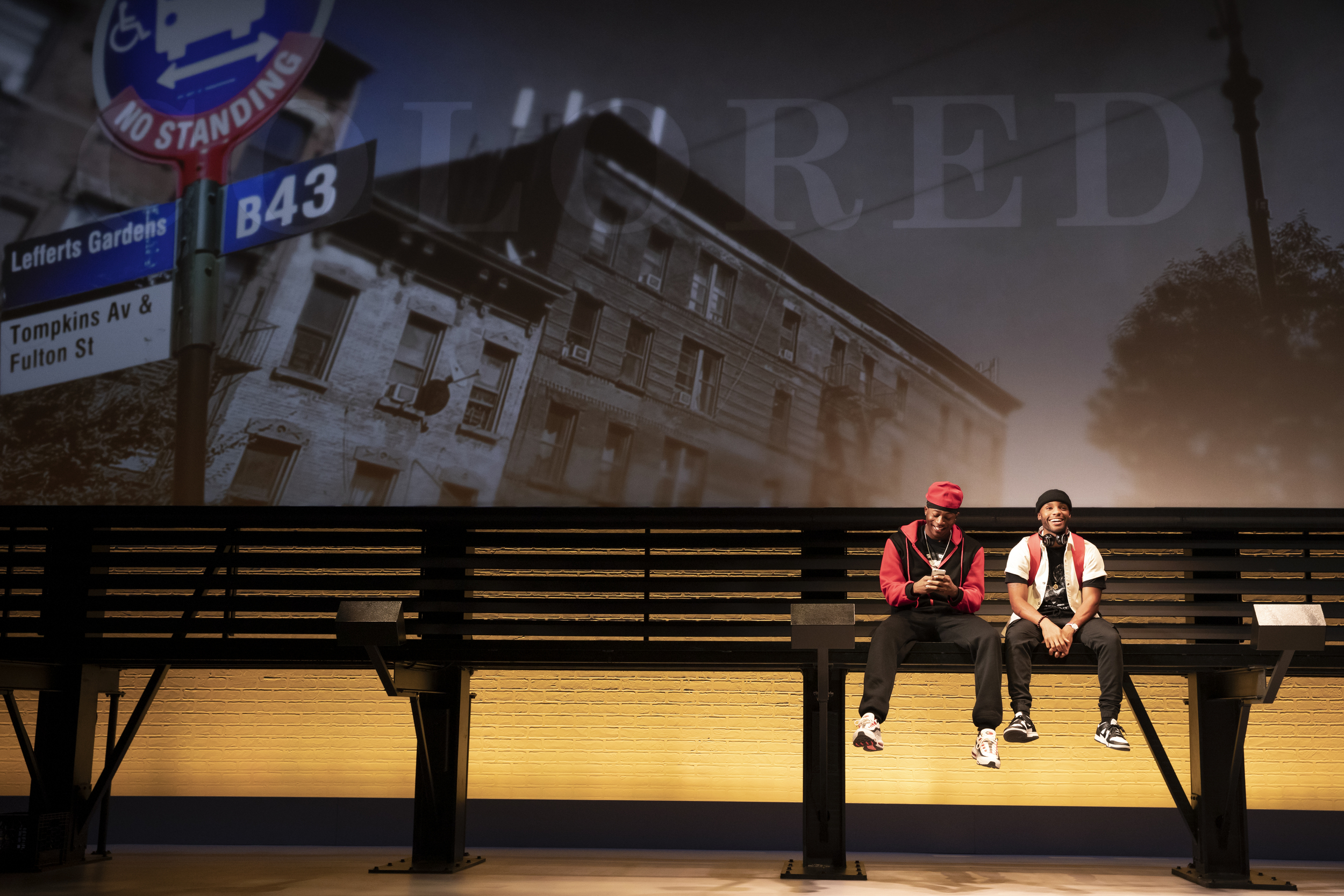 The names, though, don’t limit the characters, don’t sum them up in tidy signifiers, but rather serve as themes for exploration, starting points for considering the varied and complicated factors that motivate, frustrate and inspire them. A character known as Lust, for example, isn’t merely the personification of sexual libido, a comic, leering predator, but a young man whose longing for connection finds its most eloquent expression in the physical, both imagined and actual.

Presenting themselves singly and in a variety of groupings – the latter most joyously arriving in a scene set at the neighborhood barbershop – are:

In one vignette after another, presented as a day in the life of this Brooklyn neighborhood, the characters – beautifully portrayed by one of the best ensembles on a New York stage today – come to life so vividly and with such authenticity that we’re continually caught off guard by the unexpected. Happiness, for example, begins his day with a jog, taking in the sights of his new neighborhood – he’s originally from the South, by way of Manhattan – and in doing so all but demands us to see these old streets through his eyes. Later, when this newcomer arrives for the first time at the barbershop, his quandary – to come out, or not to come out – is illustrated with such panache in a split second of pure comic inspiration that the audience at the reviewed performance broke into applause and laughter that all but stopped the scene. 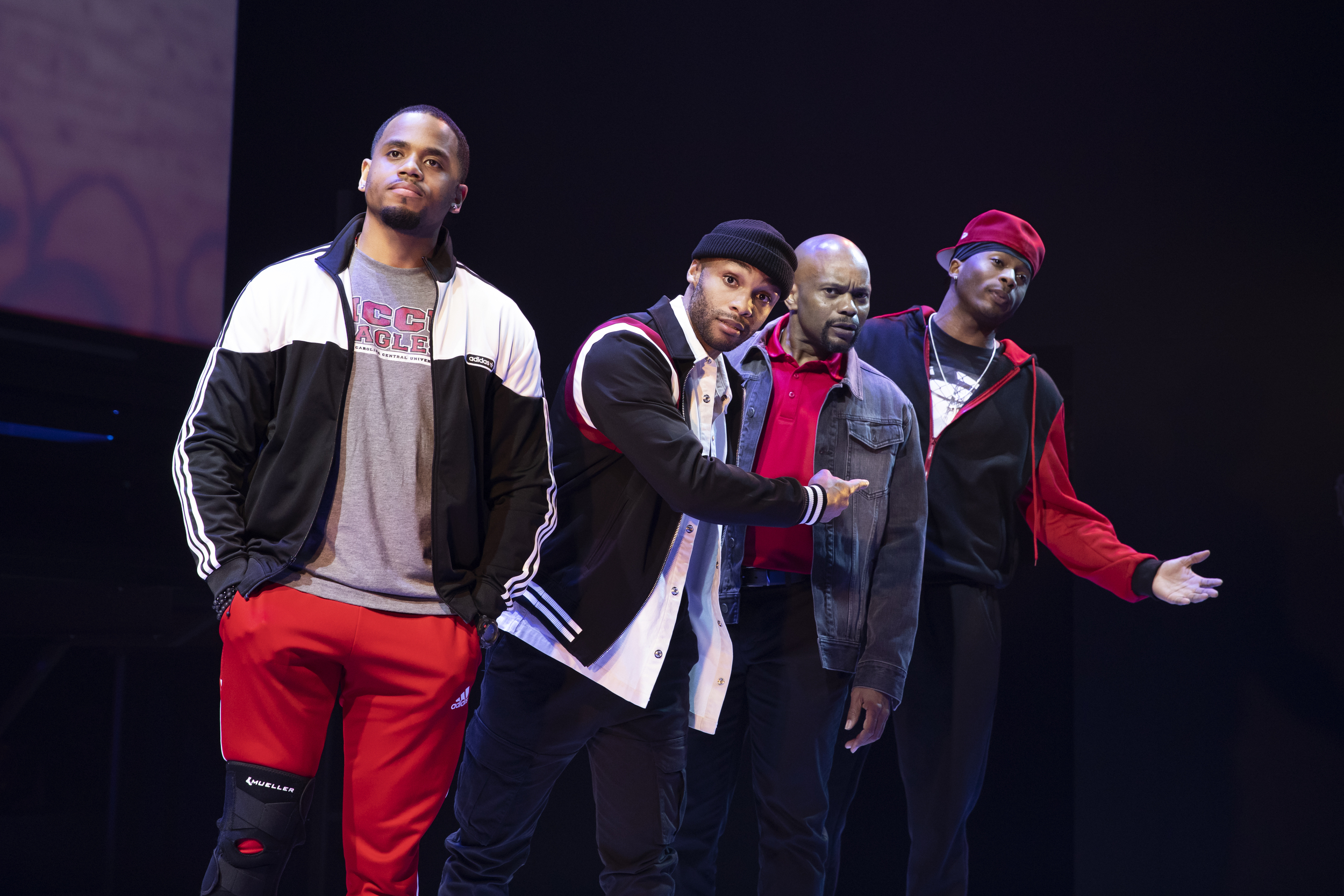 To select other passages and monologues here seems both random and unfair, but since Thoughts doesn’t so much contain a narrative plot as impressionist moments, here is just a sample of what you can expect:

On a largely empty stage beautifully lit (with a projection design by Sven Ortel that incorporates Brooklyn realism and painterly flourish, and should, by all rights, reignite the call for a Tony Award category specifically for this art form) conjures a universe, in one instance almost literally so: In an awesome sequence that sees Burnside’s Love recite a poem not so much against a starry night sky but as one with it, the audience is enveloped in pin-point illuminations, a coup de theatre that brings all aspects of this production – Scott’s words, Broadnax’s direction, the visual and aural designs and the actor’s insanely fluid grace – together in one moment of pure transcendence. “I grabbed my moon easel and cloud palette,” he says, recalling a love at first sight, “and started to add stars to her masterpiece.”

Amazingly, that isn’t the only such moment, but to name them all would be an attempt to play the play here from start to finish. Not to put too fine a point on it: Thoughts Of A Colored Man is among the best new plays to arrive on Broadway in ages – pre-pandemic ages, to be clear – as funny, poignant, complicated and wise as the seven men and their offstage collaborators who give it breath.