The black African businesses being overlooked by white US investors

“Sorry for asking, but do you understand that the money belongs to the company and is not your personal fund?”

When Jesse Ghansah saw this question in an email from a prominent white investor in San Francisco while fundraising for his first startup four years ago, he refused the deal.

The 28-year-old Ghanaian entrepreneur and his co-founder found it condescending when they were already in Silicon Valley’s prestigious startup development program Y Combinator. “I really doubt that a white founder would be asked the same. There are a lot of systemic issues as a black founder raising money abroad,” he says.

His experience is not uncommon.

While many were wary of speaking publicly, African entrepreneurs told the Guardian about humiliation, discrimination, stereotyping and sometimes racism that they endure in interactions with some of the world’s most prominent investors.

North America-headquartered investors accounted for 42% of all African venture capital deals in the last five years, according to the African Private Equity and Venture Capital Association. Only 20% of venture cash came from Africa-based investors, forcing the continent’s entrepreneurs to seek support from westerners.

Of the top 10 African-based startups that received the highest amount of venture capital in Africa last year, eight were led by foreigners, the Guardian’s analysis of public data revealed.

In Kenya, for instance, only 6% of startups that received more than $1m in 2019 were led by locals, a Viktoria Ventures analysis found. In Nigeria, 55% of the big money deals went to local founders and 56% for South Africa.

Global heavyweights such as Goldman Sachs, Stanford University, Chan Zuckerberg Initiative, Andreessen Horowitz and Sequoia Capital have all invested in startups started by white founders in Africa more frequently than they have invested in firms led by black Africans.

Advantages that white entrepreneurs have include having a safety net to take time off to travel to Africa, backgrounds in elite education and better access to US-dominated funding funnels.

“It’s obvious that I come from a privileged standpoint,” says Matt Flannery, a white American behind two Africa-facing startups, Kiva and Branch International, which have collectively raised more than $270m, according to the industry website Crunchbase. “I grew up in a relatively wealthy place, I went to Stanford University, I live in the Bay Area. I have dozens of venture capitalists as friends, and obviously that helped me raise money,” he told the Guardian from his home town in Colorado.

Flannery said he has always been concerned about the funding gap in Africa and is working to expand access to financing for African entrepreneurs. Across the east African region, only 10% of all funding for startups went to local founders, according to a 2017 study by Village Capital.

One exemplar is Twiga Foods, a seven-year-old startup that connects food producers and vendors to markets that has raised $67m. It was co-founded by Peter Njonjo, a Kenyan who was a senior Coca-Cola executive and an Oxford-educated American. Grant Brooke, the co-founder, who is originally from Texas, said he is aware of “a lot of underlying biases and advantages” of his background.

“I’ve seen this in real time. When I talk to a venture capitalist who looks like me and has the same educational background, even when I mess up something, they’ll just correct me and write it off as a conversation among colleagues,” he said. “If a black African founder were to do the same, they would see him as ignorant and judge him differently. I don’t even think that’s conscious, but they do it.”

Brooke blames the tough conditions for outsiders on those who run funds and the investment committees that make final decisions. In 2018, there were just seven black decision-makers at the 102 largest investment firms in the United States, a survey by the Information showed. Only 1% of venture-backed founders in the US are black, according to the review website RateMyInvestor.

At 500 Startups, “the most active early stage venture capital firm in the world”, black people are largely underrepresented. It estimates that only 92 founders identified as Black or African American out of the 2,400 companies it has invested in worldwide. “We look for companies that are globally focused and can scale beyond their home country,” Clayton Bryan, a black Venture Partner at the firm said in a statement. 500 Startups had two African startups out of 29 in its most recent cohort.

“Many Africans have had their intellectual property stolen so they don’t own their ideas or their companies,” says Jamme, the UK-based founder of the non-profit iamtheCODE. She says some have nicknamed her an “angry black woman” for calling out the power imbalance.

Twiga’s Brooke, who met his Kenyan co-founder while studying for his doctorate degree at Oxford, understands why it is easy for expatriates to set up shop in Kenya. “There’s a lot of young westerners who can afford to take off a year or two of their life and not have income and try to start something because their parents will support them,” he says. “Kenyans can’t even move to America without having a job, yet Americans can move to Kenya legally.”

Stephen Gugu, a co-founder of ViKtoria Angel Business Network in Kenya, has followed the flow of capital into the so-called Silicon Savannah but noticed that foreigners sell their vision better. “In all honesty, the expatriate founders pitch better than we Kenyans do. They’re able to paint this picture of an Africa that is full of opportunity,” he said. “Local founders are not as aggressive in their pitches.”

A white founder is 47,000% more likely to be funded in Kenya than in the US, the Seattle-based author and entrepreneur Roble Musse calculated based on 2018 disclosures. White people make up less than 1% of the population. He discovered that 65% of expatriate founders – mainly from the US, the UK, Italy, Denmark and Germany – had not even lived in Kenya before they started their companies.

The ignorance about the African market by the deepest-pocketed investors has stunted many indigenous youths on the continent with promising ideas. “If I was white, my idea would have been taken at face value. But because I’m black, I need to go the extra mile, I need to make sure that my education level is right, that my product actually does what I say it does,” says South African polymer technologist Nomahlubi Nazo.

She quit her job and took a cosmetic formulation science course before launching her startup, Foi Science. But three years later she is still bootstrapping and looking for seed funding to carry out clinical trials before she can get approval to sell her products. 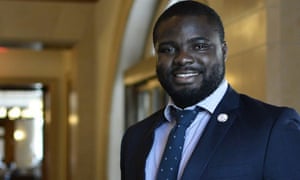 Iyinolowa Aboyeji blames the structural issues with capital on the continent on local banks and pension funds that have not embraced venture capital. The 29-year-old Nigerian is one of the most successful African entrepreneurs of his generation, having co-founded two of the continent’s best-known startups, the payments company Flutterwave and Andela, which outsources African software developers to global companies. “I think it is too easy for people to make this a white or black issue but that only benefits privileged Africans with Ivy League degrees and MBAs who believe funding should be given to them on a platter just because of their skin color,” emailed E, as he is known.

“Two of my six co-founders for Andela might have been white but I actually think it hurt our earliest fundraising almost as much as it might have helped us. It is not easy to believe a white man or woman will know what they are doing in Africa. Our presence actually helped assuage a lot of investors that they weren’t throwing money into some white savior project.”

His financing initiative, called Future Africa, allows anybody to fund the continent’s innovators with at least $10,000. The first deal was fully funded within 72 hours, the second in six hours, both for over $100,000. “If we in Africa keep denying young people opportunities to make mistakes and impact and then go on to blame racism for the discrepancies in funding, we are only interested in point[ing] fingers, not in the deep structural changes that are in our power to make to turn the situation around,” he wrote.

Jesse Ghansah has recently just closed a round of funding from both African and foreign investors for his second startup and believes the tide is slowly turning. He is now the founder and CEO of financial technology company Swipe but the Ghanaian knows there is still work to do. “The yardstick used to judge African founders is really different. Most of the investors are white, so having a white founder on your team helps,” he said.

More local venture capital funds and angel investors are getting started on the continent to address the absence of patient capital and the funding disparity.

Ingressive Capital by Maya Horgan Famodu, a 29-year-old Nigerian American, is one of them. It just doubled the size of its three-year-old fund to $10m to invest in “early stage tech-enabled startups” in Nigeria, Kenya, Ghana, Egypt and South Africa. “There are so many brilliant youths across the continent who just need a little bit of access and introduction or seed financing to build the next billion-dollar business,” she says of her mission.