Renault Kiger is a hatchback killer

With generous space, attractive design, handful equipment list and topped with a killer price tag, the Renault Kiger could well be the new ace in the sub-4 meter SUV segment, says Rajesh Alva/Rediff.com. 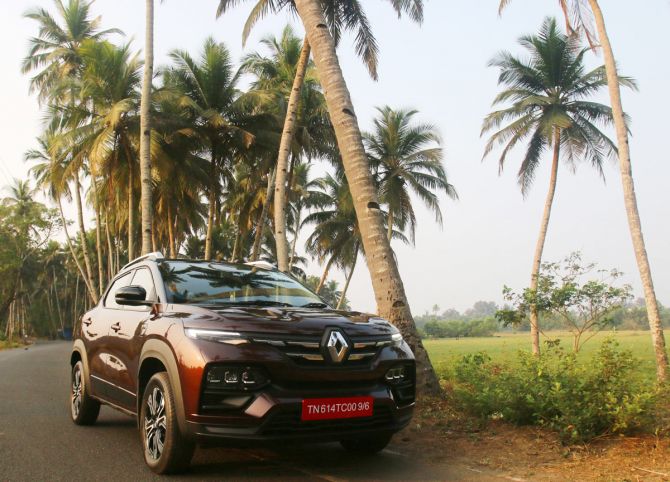 Renault India have a knack for doing things differently.

They have been studying the Indian consumer carefully before launching value-for-money vehicles like the Kwid and Triber.

So when Renault set out to build a sub-4 metre SUV for India, the team didn’t want it to be traditional but something unusual. Thus, Kiger was born. The Renault Kiger has been officially launched in the Indian market and it should hit showrooms this month.

Renault’s new B-segment compact SUV and their third India-specific product shows that the carmaker is battle-ready for one of the fastest-growing segments in the Indian car market.

Renault had showcased the Kiger concept in mid-2020 and the production model is almost similar to the concept design.

Kiger may be under four metres long but it has lots of space inside, as well as a capacious boot.

Renault is known for its exterior design and value for money proposition, and Kiger is no different.

It brings a fresh look to the already crowded sub-4 metre SUV segment.

Renault offers Kiger in six colour options and all of them can be had as dual-tone with a black roof.

At the front, it is quite similar to Kwid which is good as the Kwid is an impressive car.

The face gets the low triple LED headlamps unit with Renault’s signature two slat chrome grille at the front.

Like the Harrier, slim LED DRLs are placed on top of side turn indicators, while the bumper gives it a funky and muscular appearance. 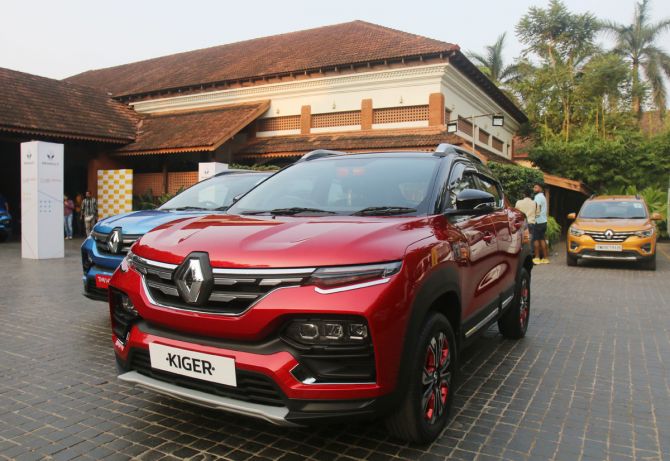 The Kiger is quite impressive from the back as well. The C-shape LED taillamps stand out. The reverse camera is also nicely hidden in the huge Renault logo.

The reverse lamp and the side indicators are a full-LED unit. 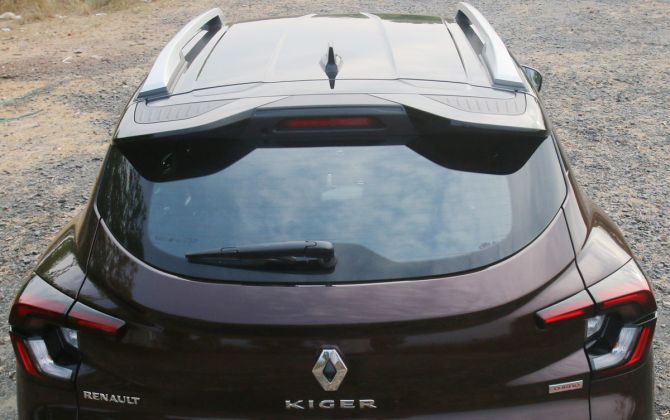 The roof spoiler is divided into two units and is nicely integrated into roof rails. The roof-integrated spoiler adds to its sporty character.

The bumper has been painted in silver and designed to give it a muscular look, which it does. 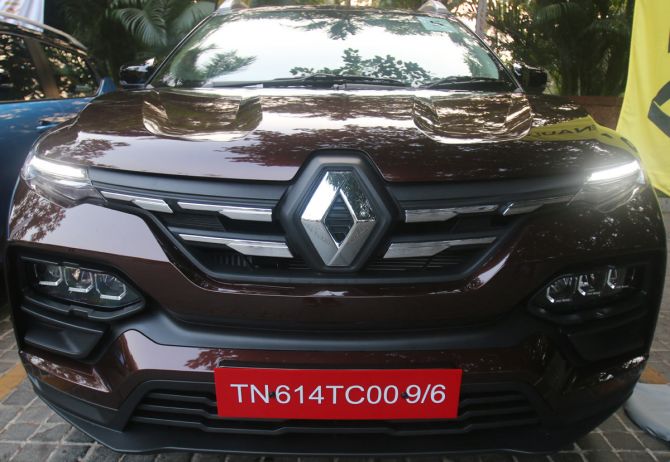 The blacked-out roofline, pillars and side mirror give it a floating effect. The roof rails are functional and good for loads up to 50 Kg.

We can see the squarish black cladding above the flared wheel arches. The big chunky wheel arches and 16-inch wheels with 205mm ground clearance give it a full SUV-like feel. Kiger has a class-leading boot space of 405 litres. Further, the rear split-seat folds to expand the storage capacity to 879 litres. The fuel tank capacity is 40 litres which is decent enough to provide a range of around 650 km on one tank.

The company claims an average of 20 kmpl per litre but however, it depends on how you use your right foot. The turbo engine is capable of producing a maximum power output of 100hp and maximum torque of 160Nm in manual and AMT, while with CVT gearbox the maximum torque is reduced to 152Nm.

The naturally-aspirated 1-litre petrol engine is capable of producing a maximum power output of 72hp and maximum torque of 96Nm.

The CVT automatic is only offered with 1-litre turbocharged petrol engine while the AMT option is also available with 1-litre naturally-aspirated engine.

The engine is refined and smooth and Renault has added more insulation to improve the NVH levels. The Kiger gets a full black cabin with some grey elements on the dashboard.

There are some well-built hard plastics on top of the dash. Renault has even used some chrome and shiny piano black to good effect.

Like the Magnite, Kiger too gets a fully digital instrument TFT cluster with a better colour scheme and better graphics.

Steering is tilt-adjustable, which allows the user to adjust the steering wheel’s position according to her/his comfort needs. We get steering-mounted audio controls, climate control, an 8-inch touchscreen infotainment system with wireless Apple CarPlay and Android Auto, air purifier, as well as height adjustment for the driver’s seat.

There’s heavy use of gloss black plastics for that added premium feel.

Renault has managed to carve out enough small spaces to keep your belongings.

So you have a twin glovebox, mobile holders, cup holders and enough bottle holders in all four doors.

The centre console is high and the shiny piano black looks very premium. The armrest is very supportive with a deep storage space and dual cup holders.

There is storage space between the elbow box and the gear lever. 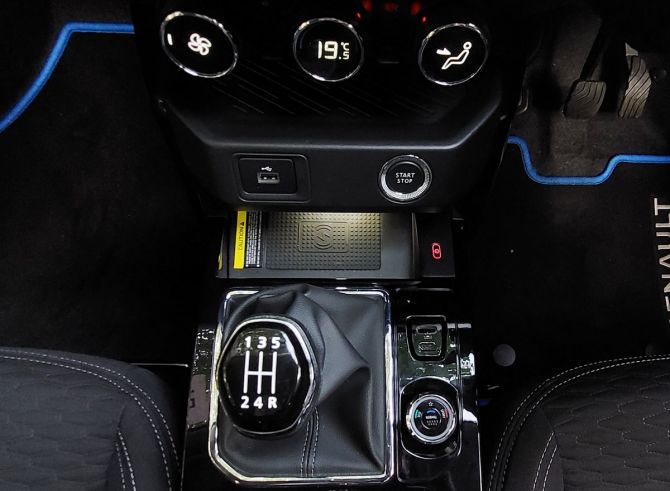 We get a rotary knob next to the gear lever to cycle through the Eco, Normal and Sport drive modes. These alter the gear shifts, engine response and steering response.

The TFT display changes colour depending on your driving mode. There is ample legroom and headroom at the rear, despite the sloping roofline.

The seat is set a bit low and the window line is a bit high. Thigh support is quite adequate for long drives.

The vehicle gets adjustable rear headrests, an armrest with dual cup holders, rear AC vents, and a 12V charging socket. Renault has decided not to provide Kiger with a diesel engine. So the bonnet is just enough to fit in a petrol engine.

The role of the 1-litre petrol engine has a lot to play in the Kiger’s large passenger space.

All versions of the car get dual front airbags while the top model also gets side airbags.

Renault has priced the Kiger so aggressively that the base variant directly false into the hatchback category of Maruti Swift, Ignis, Hyundai grand I10, Nios and Tata Tiago.

It is the most affordable SUV in its category.

With generous space, attractive design, handful equipment list and topped with a killer price tag, the Kiger could very well be the new ace in the sub 4-metre SUV segment.

The new Kiger has enough in it to draw you away from the hatchback you’ve been eyeing. 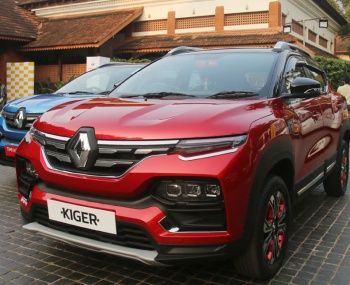