The supercar and Formula One racing group McLaren is planning to sell and lease back its Norman Foster-designed headquarters in Surrey as it seeks to shore up its balance sheet after the coronavirus pandemic triggered a slump in sales.

A sale could potentially free up more than £200m for the carmaker, which has already tapped investors repeatedly for cash since the crisis put the brakes on its sales and revenues.

McLaren does not intend to move out of the lakeside headquarters near Woking, and a spokesman said the arrangement would not have any effect on day-to-day operations.

The glass and aluminium facility opened in 2003 to house the company’s corporate and design headquarters as well as its factory. McLaren valued its property holdings at just over £200m in its latest accounts. 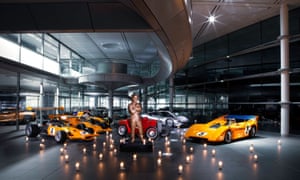 The estate agents Colliers has been hired to look for a buyer, as first reported by Sky News.

McLaren, like every carmaker in Europe, was forced to pause production in March after the coronavirus lockdown began. The company reported that its automotive revenues slumped to £143m in the first half of the year, comparedwith £592m in 2019.

The dramatic loss of revenues forced the company to raise £291m in equity in March and another £150m loan from the National Bank of Bahrain in June.

Analysts expect McLaren will need to raise further money after the loan fell short of the £275m it initially sought. Other options could include selling minority stakes in its Formula One team, whose current drivers are Lando Norris and Carlos Sainz Jr, the latter of whom will be replaced by Daniel Ricciardo in 2021.

A spokesman for McLaren said: “The potential sale and leaseback of our global headquarters and the appointment of banks to advise us on a debt restructuring and equity raise are part of the comprehensive refinancing strategy that we announced earlier this year.

“Building on the shorter-term measures that we put in place over the summer, these initiatives will deliver a stronger balance sheet and ensure that McLaren Group has a sustainable platform for long-term growth and investment.”