Want a new sofa delivered by Christmas? You may have left it too late, because Britain is in the grip of a Covid-related home furniture boom that has left factories unable to keep up with demand.

“It’s unprecedented,” says Peter Campbell, the finance director of Long Eaton Sofas, part of a cluster of companies in the heartland of the UK’s furniture-making industry, between Nottingham and Derby.

“My cash book has never been so healthy. It’s not just good, it’s crazy good … sales have been flying ever since we came back from lockdown,” says Campbell.

Never in the company’s history – it was a supplier to British Home Stores before its demise – has it had to close off Christmas orders so early. “Normally we look at four to six weeks to supply a new sofa. Now we’re at 10 to 12 weeks. The last orders we were able to take [for Christmas delivery] were last Saturday.” 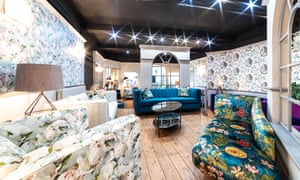 Long Eaton is a relatively small family business with about 26 employees, but it has taken on four new upholsterers, machinists and cutters to cope with demand. But among the big manufacturers, the picture is similar.

Belfield is a name unknown to most shoppers but it is the country’s biggest single upholstery company, with factories in north Wales, Manchester and Derbyshire, making about 20,000 sofas and mattresses every month. They are sold under own-brand labels at the big department store chains – and business is booming.

Its chief executive, Gary Lasham, says 2020 has been a story of two halves. “We had to put nearly all our 2,000 employees on furlough when the lockdown began. We fired back up in June and demand ever since has been super, super strong. I’m full to Christmas and beyond.”

All the manufacturers agree there is just one factor behind the boom: coronavirus. “People have not been able to go on holiday this year, so that’s £2,000 or £3,000 they’ve maybe not spent. That’s now going on furniture,” says Campbell. 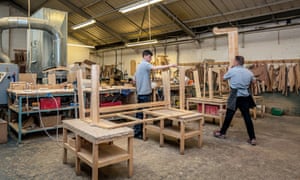 Families are also spending much more time at home and want nicer surroundings. “People are now getting their fashion fix through the home,” says Lasham.

DFS, which makes about a quarter of the sofas it sells in its own UK factories, is hiring 300 manufacturing and distribution staff to cope with demand. Its chief executive, Tim Stacey, says: “It’s all systems go for all five of our UK manufacturing sites and 1,000-plus manufacturing colleagues, who are as busy as ever.” It also has plans for 10 new Sofology stores over the next year.

Despite cheap competition from China and India, about half of all the furniture – and 80% of all mattresses – sold in the UK are still made in the UK. Furniture and furnishings make up 9% of manufacturing output, which makes it bigger than the pharmaceutical industry, and the sector employs about 130,000 people.

Belfield says its UK factories have fought off Chinese competition by mixing production line techniques with individual personalisation. “You see that swatch of fabrics to choose from on the sofa in the showroom? We call it ASAF – any sofa, any fabric. Each sofa we make is personalised. The supply chains from China just can’t match that, all they can do is make thousands of the same model,” says Lasham. 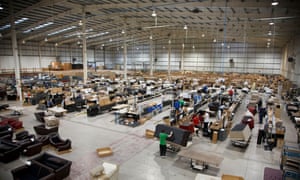 The pandemic seems to have inspired “a lot of positivity about buying British”, says Lasham. The trade association British Furniture Manufacturers (BFM) launched a “buy British” campaign to save jobs as the pandemic gathered pace, and claims more than a third of shoppers are more inclined to support buying UK-made furniture than they were before Covid.

John Lewis says people are going for bigger – four-seater sales have surged – and modular furniture. Sales of modular units to fit any room size, such as its Sofi range, have jumped 170% since lockdown. The mid-century modern look dominates, with the Barbican sofa, inspired by the 1960s towers in central London, among John Lewis’s bestsellers.

According to John Lewis, the biggest trend has been the return of the beanbag, with sales up 56% year on year. A spokeswoman says people are looking for “more informal and fun seating for the living room, kids’ bedrooms and to create spaces to be alone in other areas of the home”.

Home artwork sales are also up 50% compared with last yea,r “which we can certainly attribute to the rise in the Zoom backdrop”. But amid the jubilation among manufacturers about their V-shaped recovery since lockdown, there are parts of the industry that remain mired in gloom.

Many furniture makers specialise in “contract manufacturing”, supplying the hotel, restaurant and bar trade. Business disappeared during the lockdown, with no sign of recovery since. Many companies that fit commercial interiors are expecting to make layoffs when the furlough scheme ends.

Forest Sofa produces handmade sofas in Manchester for the Chesterfield Sofa Company and the English Sofa Company. Its managing director, Ryan Mohieddin, says sales for the household market are “exceptional”. But a third of its business was in making banquettes and other bespoke furniture for restaurants and pubs, and that business has all but collapsed.

“Hospitality sales have dropped from 33% to between 5% and 10% of our weekly sales, and the personnel employed in these areas are/were not all directly transferable,” says Mohieddin.

Meanwhile, many of the manufacturers enjoying boom times after many years of decline believe it won’t last.

“Once we sort out the virus thing you can bet your bottom dollar that the travel industry will go bonkers, and the last thing anyone will be spending their money on is furniture. There’s a cold wind that might follow this boom. Covid has helped our industry – but it might just be for the short term,” says Nick Garratt of the British Furniture Manufacturers Association.