Expansion debate rumbles on amid hush over Britain’s biggest airports

Christine Taylor has lived her entire life in the shadow of London’s Heathrow airport, her childhood bedroom affording a view of one of its two runways. She grew up in Sipson, a village that can trace its history back more than 1,000 years, but now sits immediately north of Britain’s busiest airline hub.

Now living a mile to the east in Harlington, Taylor, 62, is experiencing a rare moment of quiet, thanks to the dramatic reduction in air traffic caused by the coronavirus pandemic.

“It struck me during the period with the volcano that I had never experienced a life without planes,” Taylor says, referring to the ash cloud caused by the 2010 eruption of volcano Eyjafjallajökull in Iceland, which grounded aircraft over much of Europe for nearly a week. “Now this prolonged period has really been life-changing. I’m not sure how many of us want to go back to the old normal.”

For decades, Taylor and other locals have been fighting Heathrow’s plans for a third runway. The pandemic has added another question mark to those ambitions – a reality acknowledged by the airport last week. Heathrow’s chief executive, John Holland-Kaye, told MPs that it could be up to 15 years until the UK needed a third runway at its largest airport. 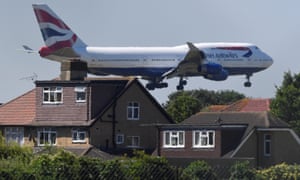 “In 10 to 15 years, if we are successful in rebooting the UK economy and getting back to full swing, I think we will still need a third runway,” he said.

Holland-Kaye was asked whether the coronavirus crisis had blown a “massive hole” in the economic argument for the third runway, but he insisted the airport’s expansion remained a “critical economic plank for the growth of the country”.

Both Heathrow and Britain’s second-largest airport, Gatwick – some 30 miles south of London – have been hoping for years to increase capacity. The pandemic has undoubtedly blown a hole in the short-term business case for those plans, and indeed for any airport expansion in the UK, with air travel not expected to recover to 2019 levels for several years. Will financial backers support multibillion-pound projects based on demand shrouded in uncertainty?

Until the pandemic hit, it was environmental rather than economic factors that were seen as the greatest obstacle to airport expansion plans. Nonetheless, Heathrow believes the case for expansion remains strong, and last week had an opportunity to remake its argument. Last Thursday the supreme court gave it permission to appeal against a ruling earlier this year that its third runway plan was illegal because ministers who approved it had not taken into account airlines’ impact on the climate crisis.

The government decided not to appeal against the initial verdict, but Heathrow is ploughing on, insisting that the privately funded project would see billions pumped into the UK’s economy, “stimulating sectors across the country and creating tens of thousands of new jobs”.

A spokesperson for Heathrow, which is owned by a consortium including Spanish group Ferrovial and Qatar’s sovereign wealth fund, added: “Once the benefits of air travel and connectivity have been restored in years to come, an expanded Heathrow will be required.” 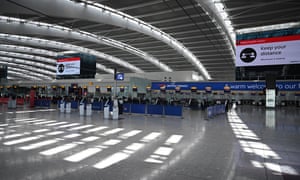 Even when commercial air travel attempts a concerted recovery, probably with social distancing measures on board, passengers are not expected to immediately revert to their pre-coronavirus travel habits. Four in 10 travellers surveyed by the International Air Transport Association (Iata) expected to wait at least six months after restrictions ease before taking a flight, and more than two-thirds (69%) said they might wait for their personal financial situation to stabilise before travelling again. The slump in passenger demand is forecast to last several years by British Airways’ owner, International Airlines Group (IAG). As Heathrow’s biggest customer, it does not foresee see a return to 2019 levels until 2023.

This slowdown has also cast doubt on Gatwick airport’s plans to develop its emergency runway for regular use, almost five years after it lost out to Heathrow in a tussle over increasing UK air capacity.

The UK’s second-biggest airport is facing the loss of two important customers, as Virgin Atlantic announced its departure just days after BA threatened to walk away. The airport’s third-largest operator, Norwegian Air, is also expected to be much smaller post-Covid. As with Heathrow, there is debate over whether Gatwick will need the extra capacity given the industry’s uncertain future.

Gatwick’s chief executive, Stewart Wingate, says he remains “very optimistic about the long-term prospects of the airport”, despite the significant impact of the pandemic on the business and the local economy.

The airport has delayed by a year its planned consultation with the local community over expansion plans, but insists this will proceed in 2021.

“The project is entirely consistent with government policy to make best use of existing runways, and we know the scheme enables modest growth, improved resilience and significant economic benefits while having little overall environmental impact compared with alternative projects,” says Wingate.

The impact of the aviation slowdown won’t be limited to the airport. The neighbouring West Sussex town of Crawley is likely to be the place hardest hit by the economic fallout from the coronavirus crisis, according to a report from the Centre for Cities thinktank. The town relies mainly on the aviation and aircraft manufacturing industries for jobs.

“It’s devastating when people lose their jobs,” says Sally Pavey, chair of Communities Against Gatwick Noise Emission (Cagne), which campaigns against the airport’s expansion plans and the effect of aircraft emissions on the surrounding area. The group doesn’t see demand returning to Gatwick, where leisure travel accounts for eight out of 10 passengers, for several years.

“Gatwick has always been reliant on the extra money in a member of the public’s pocket to spend on a low-cost holiday. If flights are no longer low-cost and people don’t have surplus money, Gatwick will be the weakest one. Every time slots become available at Heathrow, the airlines leave Gatwick.”

With its flight schedule reduced during the pandemic, Heathrow has closed one runway and is using the other for both takeoffs and landings.

Campaigners such as Robert Barnstone, campaign coordinator at the No Third Runway Coalition are worried that Heathrow might seek to continue this “mixed-mode” operating model as a future “consolation prize” if the airport fails in its quest to build a third runway. Under current rules, one Heathrow runway must be used for landings only, while the other is only for take-offs. Allowing both to handle a mix of take-offs and landings would mean the airport could add 60,000 flights year.

As campaigners prepare for the expansion appeal to be heard by the supreme court, Barnstone adds: “We need to make sure we stop expansion by the front door. We also need to stop it by the back door, through the idea of increasing flight capacity under mixed-mode operations.”

Even as the economic case against ending – or pausing – expansion grows, the UK’s biggest airports are determined that, at the very least, this debate will survive the pandemic.