Home » Business » Demand for electric cars has grown slowly. But the tsunami is coming

Demand for electric cars has grown slowly. But the tsunami is coming

Automaker Stellantis, formed by last year’s merger of Fiat Chrysler and French automaker PSA Group, and South Korean battery maker LG Energy Solution announced Monday they are partnering to produce lithium-ion batteries for the North American market.
The companies said in a news release that they plan to build a new facility with a yearly production capacity of 40 gigawatt hours. While the facility’s location is still under review, the companies said they plan to break ground in the second quarter of 2022. Production is set to begin by 2024.

The batteries it produces will go to Stellantis plants throughout North America for electric vehicles.

“Today’s announcement is further proof that we are deploying our aggressive electrification road map and are following through on the commitments we made during our EV Day event in July,” said Stellantis CEO Carlos Tavares.

Stellantis rivals General Motors and Ford are already in the process of building their own EV battery plants.
GM (GM) has two joint venture plants with LG units under construction, one in Lordstown, Ohio, which is expected to start production of batteries early next year, and another adjacent to an existing GM assembly plant in Spring Hill, Tennessee. Each plant is expected to cost $2.3 billion.
LG was the maker of the battery used in GM’s Chevrolet Bolt, which have caused fires, which in turn prompted a costly recall of almost all the Bolts sold since their 2016 debut. Those batteries were built in South Korea. LG has agreed to pay GM about $1.9 billion of the $2 billion cost of that recall.
Last month Ford (F) has announced plans for battery plants in Kentucky and Tennessee with LG rival SK Innovations, along with new assembly plants for electric vehicles. Together the new plants will cost $11 billion.
Automakers are ramping up production plans for electric vehicles, both to meet increasingly tougher environmental regulations as well as increasing demand among car buyers. Electric cars have less moving parts than gas-powered vehicles and therefore can be cheaper to build due to the reduced hours of labor that goes into assembling them. Much of the construction of electric vehicle will entail building the batteries themselves.
The fact that the automakers are creating joint ventures with other companies means the workers in the battery plants will not necessarily be represented by the United Auto Workers union, a fact that has concerned the union, which is worried about the loss of jobs the shift to electric vehicles might cause.
There is a need for new battery plants with looming shortage of the batteries needed to power the cars. The lack of inventory could put upward pressure on battery prices, and keep the cost of EVs higher than traditional gasoline cars in the near term. 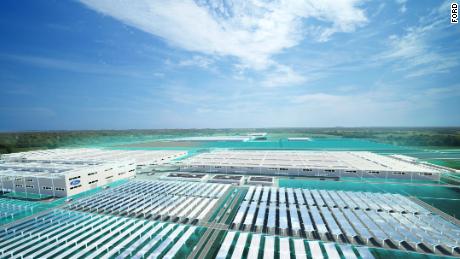 Even with its own battery plant in Nevada, electric car leader Tesla (TSLA) said it needs more batteries from suppliers, and has also said that a lack of batteries is the reason it has yet to come out with an electric semi-tractor truck, which will need five times as many batteries as a typical EV.
Back in July, Stellantis announced “plans to invest more than €30 billion through 2025 in electrification and software.” It said at the time that it was planning for 70% of its sales in Europe and 40% of sales in the United States to be either fully electric or plug-in hybrid (but with a large majority of those vehicles being fully electric) within four years.